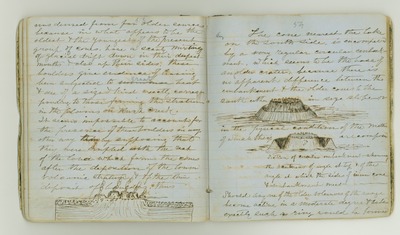 was derived from far older sources because in what appears to be the oldest & the youngest of the present group of cones, have a scanty mixing of glacial drift down in their deepest mouths & also up their sides. these boulders give evidence of having been subjected to great [immense] heat & are of a size & kind exactly corresponding to those forming the stratum in the plains on Rush Creek.

[sketch of a cross section of earth]

Aug [August] The cone nearest the lake on the south side, is encompassed by a [very] regular circular embankment, which seems to be the base of an older crater, because there is no apparent difference between this embankment & the older cones to the south either in size slope or [sketch of a cone inside a crater] in the physical condition of the matter of which they are composed.

[sketch: Section of circular embankment showing the acuteness of angle at top & of the angle at which the sides of inner cone & embankment meet.]