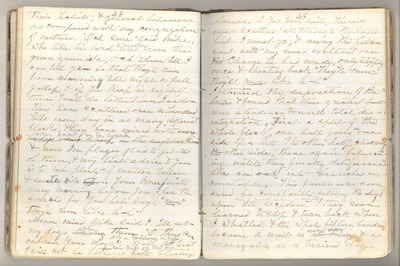 their habits and general behavior as compared with my congregation of mothers. “Och shure,” said Mike, who like his lord and master was from the green, green isle, “Och shure, all I can tell ye is that they’ll run from marnin’ till night a full gallop, and if ye keep in sight of them you’ll do better than I’ve done. They have scattered over a hundred hills every day in as many different flocks, and they have mixed with every other hand in the country, and now I’m plagey glad to git rid of them, and my best advice to you is to rub plenty of mutton tallow and swate ile on your knee-joints every marnin’ before you open the corral, for you bet they’ll ‘run’ – they’ll run like h--l.” “Never mind,Mike,” said I, “I’ll set my dogs after them.” “O, they can outrun your dogs. Not a mustang in California can kape up wid ‘em.” “Well, at least I will not be bothered with bleating lambs.” “O, yes you will. There’s ewes scattered all through the band, but I must go,” and away the fellow went with my ewes, exultant over the change he had made, only stopping once and shouting back, “They’ll run, they’ll run like h--l.” I studied the disposition of the brutes and found that their greatest fault was a tendency towards total disintegration. First a split of the whole flock, one half going on one side of a hill, the other half choosing the other side, these again bifurcating, until they finally deliquesced like an oak into branches uncountable. This fault was soon cured by constantly setting the dogs upon every branch as soon as sprouted, and they soon learned to stop and turn back when I whistled, and the whole fifteen hundred became a unit in every way and as manageable as a trained dog.