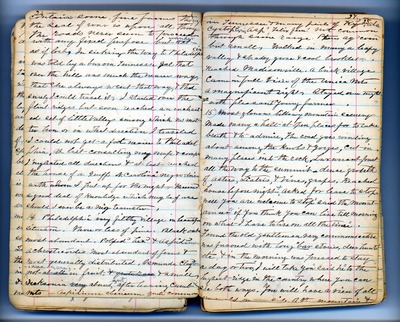 contain some fine farms, though the seal of war is upon all things. The roads never seem to proceed with any fixed purpose, but wander as if lost. In seeking the way to Philadelphia was told by a buxom Tennessee gal that over the hills was much the nearer way, that she always went that way, and that surely I could travel it. I started over the flint ridges, but soon reached an enchanted set of little valleys among which no matter how or in what direction I traveled could not get a foot nearer to Philadelphia. At last consulting my map and compass I neglected all directions and at last reached the house of a gruff N. Carolina negro driver with whom I put up for a night. Received a good deal of knowledge which may be of use should I ever be a nig teamster. 14th. Philadelphia very filthy village in beautiful situation. More or less pine. Black oak most abundant. Polypod’ hea’ and Aspidium acrostichoides most abundant of ferns and most generally distributed. Osmunda Claytoniana rare, not in fruit, and small. Dicksonia abundant after leaving Cumberland Mountains. Aspidium ebeneum quite common in Tennessee and many parts of Kentucky. Also Cystop’ Asp’ Felix fem’ not common through same range. Pteris aq[uilina] common but small. Walked in many a leaf valley and shady grove and cool brooklet. Reached Madisonville, a brisk village. Came in full view of the Unicoli Mountains, a magnificent sight. Stayed over night with pleasant young farmer. 15th. Most glorious billowy mountain scenery. Made many a halt at open places to take breath and to admire. The road goes winding about among the knobs and gorges, cut in many places into the rock. Luxuriant forest all the way to the summit - dense growth of asters, liatris and vines, grapes. Reached house before night, and asked for leave to stop. “Well, you are welcome to stop,” said the mountaineer, “if you think you can live till morning on what I have to live on all the time.” Found the old gentleman very communicative; was favored with long ‘bar’ stories, deer hunts, etc. and in the morning was pressed to stay a day or two. “I will take you,” said he, “to the highest ridge in the country where you can see both ways. You will have a view of all the world on one side of the mountain and