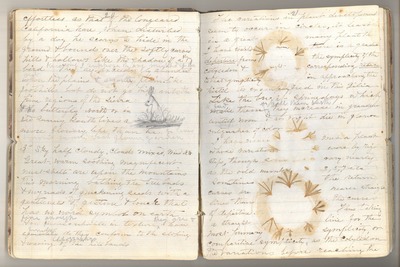 effortless as that of the long-eared California hare. When disturbed by a dog he scorns to hide in the ground and bounds over the softly curved hills and hollows like the shadow of a flying bird, knowing, I suppose, the dog might dig him out. They are exceedingly abundant on the plains and smooth plain-like foothills, but do not go high into the pine regions of the Sierra. No butterfly North or in the sunny South lives a more flowery life than he- he lives and moves in one vast flower garden. [Tiny drawing of hare] [Jan] 3d. Sky half cloudy. Clouds mixed. Wind N.W. Great, warm, soothing, magnificent mist sheets are upon the mountains this morning, bathing the tree buds and myriads of quickening seeds with a gentleness of gesture and touch that has no word symbol on earth. How indescribable in texture they are, and how finely do they conform to the sloping and waving topography of the hill bands. The variations in plant development seem to occur in circles – at least in a great many plants that I have watched there is a gradual departure from the simplicity of the cotyledon and corresponding return to that simplicity in approaching the pistil, as exemplified in the gilia. [Bits of plant pasted on the page]. Like the bright spring days which call them forth and feed them, they increase in grandeur until noon, and at night die in glorious outgushes of color. I have never met a plant whose variations were by regular steps, though some vary nearly as the odd numbers 3, 5, 7, etc. Sometimes the return curves are nearer straight lines than the curves of departure. Thus taking a straight line for the most primary simplicity, or comparative simplicity, as the colyledon, the variations before reaching the