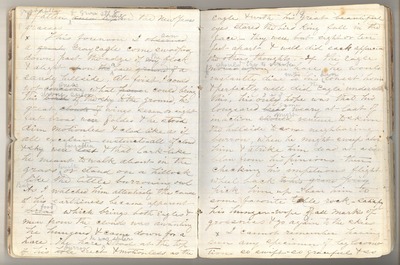 gradually fatten and grow strong on the new year’s grasses. This forenoon I saw a gray eagle come swooping down past the edge of the flock and alight on a bare sandy hillside. At first I could not guess what could bring this strong sailor of the sky to the ground. His great wings, seven or eight feet broad, were folded as he stood, dim, motionless, and clod-like as if all excelsior instincts – all of cloud and sky were forgotten, and that lark-like he meant to walk about in the grass hereafter, or stand on a hillock like the little burrowing owl. But as I watched him attentively, the cause of his earthiness became apparent. Food, which brings both eagles and men from the clouds, was awanting – he hungered and came down for a hare. The hare he was after stood at the top of his burrow, erect and motionless as the eagle, and with his great beautiful eyes stared the bird king full in the face. They were but eight or ten feet apart, and well did each appreciate the other’s thoughts. If the eagle should try to strike the hare he would instantly dive into his den, and perfectly well did the eagle understand this. His only hope was that his long-eared game, weary at last of inaction, might venture to skim the hillside to some neighboring burrow, when he might sweep above him and strike him dead at a single blow from his pinions, then checking his impetuous flight, wheel back, pick him up, and bear him to some favorite table rock, satisfy his hunger, wipe off all marks of grossness, and go again to the skies. I cannot remember having seen any specimen of leg locomotion so swift, so graceful, and so