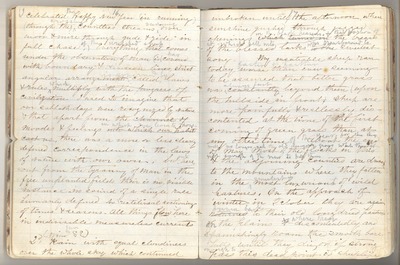 I celebrated the Happy New Year crossing countless streams, running “over moor and mire through gude and gide” in full chase of the wretched sheep. *Everything is governed by laws.* (Everything that comes under the observation of man has boundary and division lines, strict angular arrangements called laws and rules which multiply with the progress of civilization.) I used to imagine that our Sabbath days were recognized by Nature and that apart from the moods and feelings in which we learn to move there was a more or less clearly defined correspondence in the laws of Nature with our own. *But out here in the free unplanted fields there is no rectilineal sectioning of times and seasons* (But here out from the tyranny of man in the free unplanted fields there is no sound of a single rule humanly defined – no rectilineal sectioning of times and seasons.) All things flow here in indivisible, measureless currents. 2nd. (Wind from S.E.) Rain with equal cloudiness over the whole sky, which continued unbroken until the afternoon when sunshine gushed through jagged openings in the black heavens and that portion of it which fell into the breasts of the blessed larks was transformed to sweetest song. My insatiable sheep ran today faster and farther than ever, seeming to be assured that better grass was always just beyond them. Sheep are more restlessly discontented at the time of the first coming of green grass than any other time of the year, for then they will no longer eat the old decaying grass, while there is not enough of the new to fill them. About the end of May most of the flocks in this and the adjoining counties are driven to the mountains, where they fatten in the sweetest and most luxuriant of wild pastures. On the approach of winter in October they are driven back to their old long-dried pastures on the plains, where they discontentedly and famishingly roam the smooth bare hills until they die, or if strong enough to pass this dead point of sheep life,