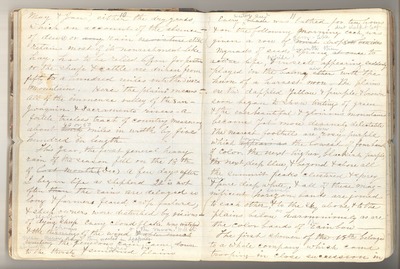 May and January, either the dry grass, which on account of the absence of dew or rain still retains most of its nourishment like hay, has to be relied on for pasture, or the sheep and cattle are driven from fifty to a hundred miles into the Sierra mountains. Here “the plains” means all of the immense valley of the San Joaquin and Sacramento rivers – a fertile, treeless tract of country, measuring about 40 or 50 miles in width by five hundred in length. This year, the first general heavy rain of the season fell on the 18th of December, a few days after I began life as [a] shepherd. It is not often the rains are delayed so long and farmers feared crop failure, and sheep owners were disturbed by visions of starving sheep. Every cloud flake was watched and the changes of the wind and the moon. “Will it never, never rain,” they wailed in despair. At length the generous rain came to the thirsty sun-baked plains. Every waiting seed was bathed for ten hours and on the following morning each dead stalk and leaf was given a row of gem-like drops. Myriads of seeds beneath them sprang to life, while insects appearing suddenly played in the balmy air with the hum of a harvest moon. The plains, ere this dappled yellow and purple and brown, soon began to show tinting of green and the ever-beautiful and glorious mountains became yet more divinely delectable. The nearest foothills are now rosy purple, which forms the lowest of four bands of color – the next higher, blackish purple, the next, deep blue, and beyond and above all, the summit peaks, clustered and spirey, [are (were) pure deep white, – and all of these magnificent level bands are joined to each other, and to the sky above, and to the plains below as harmoniously as are the color bands of the rainbow. The first shower of the 18th belonged to a whole company which came trooping in close succession in