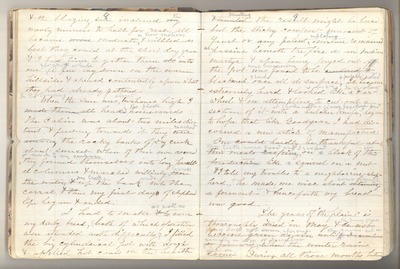 and the blazing sun inclined the wooly runners to halt for rest. All became moderate in their motions and nibbled as best they could at the short dry grass, and I had time to gather them into one flock, while a few lay down on the warm hillsides and chewed contentedly upon what they had already gathered. In the evening when the sun was about two hours high I headed the flock homewards. The cabin was about two miles distant, and feeding towards it they reached the rocky banks of Dry Creek about sunset, when of their own accord and much to my surprise, they formed themselves into long parallel columns and marched willingly across Dry Creek, up the bank, and into the corral. Thus my first day of shepherd life began and ended. I had to make as well as earn my daily bread, both of which operations were attended with difficulty. I filled the big cylindrical pot with dough and applied hot coals on the hearth, trusting the result might be bread, but the sticky compost, innocent of yeast or any patent inflating mixture, remained as passive beneath the fire as an Indian martyr, and upon being pried out of the pot next morning was found to be black and hard over all its surface, and perfectly solid. It became extremely hard in cooling and looked like a cart-wheel, and on attempting to cut out a section of it with a butcher knife it broke with a glassy fracture and I began to hope that like Goodyear I had discovered new article of manufacture. My teeth were good and I rasped on a block of it like a squirrel on a nut. I told my troubles to a neighboring shepherd, and he made me wise about sour dough ferment, and henceforth my bread was good. The grass of “the plains” is thoroughly dried in May and the young green grass does not sprout until the rains set in, usually in November or December. During all those months between