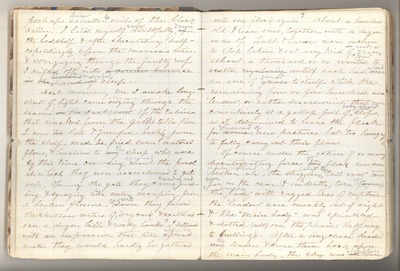 perhaps lesser evils of the black cabin. I laid myself very doubtfully down on the bed-shelf, and after speculating half-repentingly on the morrow’s duties and star gazing through the faulty roof, I drifted off into merciful sleep. Next morning ere I awoke long sheets of light came streaming through the seams of the cabin that reached from the gable to the floor. I was late and jumped hastily from the shelf, made tea, fried some watered flour, and hastened to the sheep who were by this time crowding against the panel at which they were accustomed to get out. Opening the gate they came crowding out, gushing and squeezing like water escaping from a broken flume, crossed Dry Creek and scattered over a dozen hills and rocky banks, and I followed with an impression that like spilt water they would hardly be gathered into one flock again. About a hundred old lean ones, together with a dozen or so of half and lame were inclined to stop behind and eat any kind of dried weeds or grass. About a thousand or so wanted to scatter until each had about an acre of ground to itself, while the remaining four or five hundred were “leaders” or rather secessionists that ran convulsively at a gallop full of very short stops, as if determined to leave the flock for dreamed of new pastures, but too hungry to fully carry out their plans. Of course under the action of so many disintegrating forces the flock was soon widely scattered, the stragglers called the “tail end” were soon far in the rear, torn off the “main body” with ragged lines of rupture, the “leaders” were mostly out of sight and the “main body” was sprinkled and dotted over the plains half way to Snelling. After a long chase I headed the leaders and drove them back on the main body. The sky was cloudless