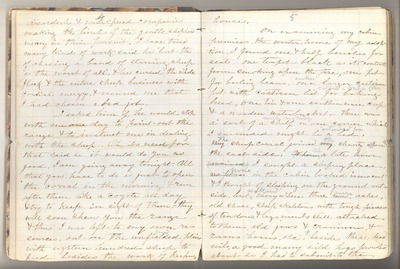 disorderly and wide-spread companies, making the limbs of the gentle shepherd weary in their pursuit. “I have tried many kinds of work,” said he, “but this of chasing a band of starving sheep is the worst of all,” and he cursed the whole flock and the entire sheep business with cordial energy, and assured me that I had chosen a bad job. I asked him if he would stop with me one day to point out the range and to instruct me in dealing with the sheep. “Oh! No need for that,” said he. “It would do you no good. I am going away to-night. All that you have to do is just to open the corral in the morning and run after them like a coyote all day and try to keep in sight of them. They will soon show you the range.” And thus I was left to my own resources, out on the unfielded plains with eighteen hundred sheep to feed, besides the work of keeping house. On examining my cabin premises, the winter home of my adoption, I found one and [a] half benches for seats, one teapot black as its contents from smoking on the fire, one pot for boiling beans, another larger cast-iron pot with cast-iron lid, called a Dutch oven, for baking bread, one tin and one earthenware cup, and a wooden water bucket. There was a sort of a rough rickety shelf in one corner, which I surmised might be intended for a bed. The sheep corral joined the shanty on the east side. At a late hour I sought a sleeping place. None in the cabin looked innocent, and I thought of sleeping on the ground outside, but scattered everywhere there were ashes, old shoes, sheep skeletons with tough tendons and ligaments still attached to them, old jaws and craniums, and rams’ horns, etc. And besides these dead evils, a good many wild hogs prowled about, so I had to submit to the