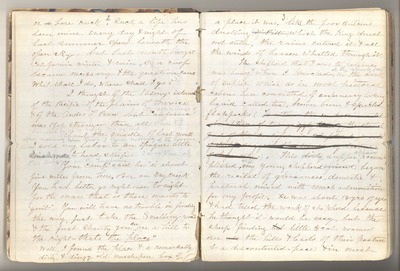 or bare rock. Such a life has been mine, every day and night of last summer spent beneath the open sky; but last month brought California winter and rain, so a roof became necessary and the question came, What shall I do, where shall I go? I thought of the palmy islands of the Pacific, of the plains of Mexico, and of the Andes of Peru, but the attractions of California were yet stronger than all others, and I decided to stay another year or two. About the middle of last month, after warning him that I knew nothing of the business, I sold my labor to an opaque little Irishman to herd sheep. I was then at Pat Delany’s on the Tuolumne. “Your camp,” said he, “is about five miles from here, over on Dry Creek. You had better go right over to-night, for the man that is there wants to ‘quit.’ You will have no trouble in finding the way. Just take the Snelling road and the first shanty you see on a hill to the right – that’s the place.” Well, I found the place, and a remarkably dirty and dingy old misshapen box of a place it was, like the poor Briton’s dwelling which the King durst not enter, the rains entered it and all the winds of heaven whistled through it. The shepherd that I was to relieve was busy when I knocked at the shanty door, in the work of supper, which as in most pastoral cabins here consisted of an uneasy looking liquid called tea, brown beans, and speckled flapjacks. This supper affair accomplished, the young shepherd began the recital of grievances, domestic and pastoral, mixed with much admonition for my profit. He was about 18 years of age, and had tried the work of shepherd because he thought it would be easy, but the sheep, finding little to eat, roamed over the hills and levels of their pasture at a discontented pace, and in most