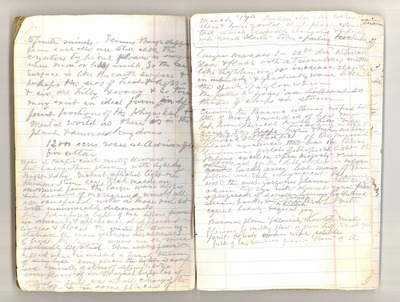 to finite minds. Flowers though differing from each other are still alike the creator’s typical flower is every- where more or less visible. So the sea surface is like the earth surface & perhaps the seas of heat & light & air are hilly & wavy & so there May exist an ideal form in dif- ferent portions of the physical & mental world as there is in the plant & animal Kingdoms. 12,000 acres roses at Adrianople for altar Water of Pacific Coast mostly blackish but everywhere glowing with light by night & day richest reflected light near Panama I ever saw. Rich masses are mirrored from the larger wave slopes & in seasons of increasing winds all are overspread with a loose veil set with innumerable diamonds The phosphoric light of sea differs from in amount & appearance at different times & places the greater the storm ag itation the more generous disclosures of light the larger waves are the more grandly lighted Upon every foam- capped wave is massed a heavenly treasure of starry light Some places the light is comp osed mostly of stars of different size some places of smooth equal light as if the water itself was wholly changed to light & in some places of

March 19th Meteor star like motion slow & horizontal short flame coloured tail which gradually elongated & sep[a]rated into small knots like a failing rocket ____________________________________________________________________________________ larger masses 1-10 ft. in dia῀ which glow & flash with a tremulous motion like lightening, or increase slowly in intensity & gradually wane like the spark of a glow worm The paths of fishes are brilliant so those of ships in storm Crossing the Panama isthmus we find but little of swamp & none at all of level meadow but hemispherical knoby hills rise increasing in size & singly & in heaps higher & higher as we complexity of grouping approach the Pacific Of the myriad plant existences that like of these luxurious fields of tropical light the Palms excel in open majesty & rise above [ ] each on the hill slopes in imposing ranks lordly array but many of their fellows are truly magnificent flaming with the most gorgeous flowers that chain the eye with almost equal pow[er] & myriads of smaller beings by sheltered covered stream banks & ^ in shade throb with hidden equal beauty & equal joy. Bananas flower Yellowish, monopet ῀, small flowers of milky plant of [snow] hill small yel. fruit black when ripe, edible fields of luxurious ferns Pan῀ C A