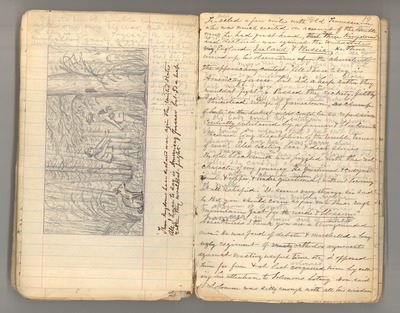 [Drawing – “Three kingdoms have declared war agin the United States. All I have to say is Americay forever, but I’d a heap rather they wouldn’t fight.”]

Traveled a few miles with an old Tennessean who was much excited on account of the news he had just heard. “Three Kingdoms,” he said, “have declared war agin the United States, England, Ireland, and Russia.” He thus wound up his observations, “All I have to say is America forever, but I’d a heap rather they wouldn’t fight.” “But are you sure this news is true,” I asked. Yes, he was quite sure, for he and some neighbors were at the store last night and Jim somebody could read and he found out all about it in a poor paper.

No clump of huts in the darkest wilds could be so repulsive.

An old lady could not entertain me because she found on inquiry that I had not the change to pay her. Was sorry, etc., but so many during the war many had offered ten dollar bills she could not change. But taking pity [on me] after climbing mountain [she] offered a drink of milk. Cordially entertained by a farmer and blacksmith. Received long description of the terrible times of war, also exciting bear and deer stories. The old blacksmith was puzzled with the real character of my journey. He questioned and cross-questioned and upper and under-questioned, without becoming at all satisfied. “It seems very strange, sir,” said he, “that you should come so far into these rough mountains just for the weeds and blossoms. Nevertheless I think you are a strong-minded man.” He was fond of debate and marshaled a regiment of orthodox arguments against wasting useful time, etc. I opposed him for fun and at last silenced him by calling his attention to Solomon’s botany. “Now,” said I, “Solomon was silly enough with all his wisdom