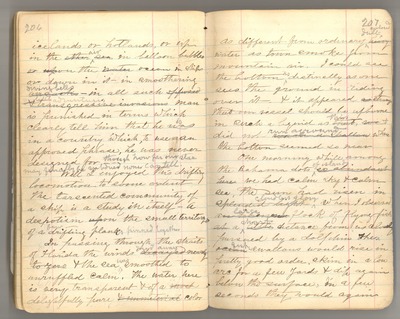 icelands or hotlands, or up in the air in balloon bubbles, or on the ocean in ships, or down in it in smothering diving-bells – in all such little adventures man is punished in terms which clearly tell him that he is in a country which, to use an approved phrase, he was never designed for, though how far our star may finally be subdued, none can tell. Well, I enjoyed this drifting locomotion to some extent. The tar-scented community of a ship is study in itself – a despotism on the small territory of a few drifting planks pinned together. In passing through the straits of Florida the winds died away and the sea was smoothed to unruffled calm. The water here is very transparent and of a delightfully pure color, as different from ordinary dull-colored water as town smoke from mountain air. I could see the bottom as distinctly as one sees the ground in riding over it, and it appeared strange that our vessel should be upborne in such a liquid as this and did not run aground where the bottom seemed so near. One morning while among the Bahama dots of islands we had calm sky and calm sea, the sun had risen in cloudless glory, when I observed a large flock of flying fish a short distance from us closely pursued by a dolphin. These fish swallows would rise in pretty good order, skim in a low arc for a few yards and dip again below the surface. In a few seconds they would again