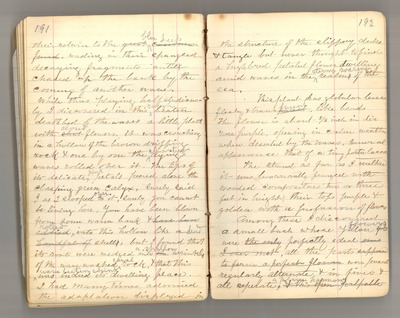 their return to the blue deep, wading in their spangled decaying fragments until I chased up the bank by the coming of another wave. While thus playing, half studiously, I discovered in this rough beaten deathbed of the waves a little plant with closed flowers. It was crouching in a hollow of the brown dripping rock, and one by one the chanting dying waves rolled over it. The tips of its delicate pink petals peered above the clasping green calyx. “Surely,” said I, as I stooped over it, “surely you cannot be living here. You have been blown from some warm bank and rolled into this hollow like a dead shell.” But I found that its roots were wedged into a shallow wrinkle of the wave washed coral rock, and that this wave-beaten chink was indeed its dwelling-place. I had many times admired the adaptation displayed in the structure of the slippery dulse and tangle, but never thought to find a highbred petaled flower dwelling amid waves in the stormy roaring realm of the sea. This plant has globular leaves, fleshy and translucent, like beads. The flower is about 5/8 inches in dia., rose purple, opening in calm weather when deserted by the waves. General appearance that of a tiny portulacca. The strand as far as I walked it was luxuriantly fringed with wooded compositae two or three feet in height, their tops purple and golden with a profusion of flowers. Among these I discovered a small bush whose yellow flowers were perfectly ideal. All the parts were present, regularly alternate, and in fives and all separate, a plain harmony. and this open palpable