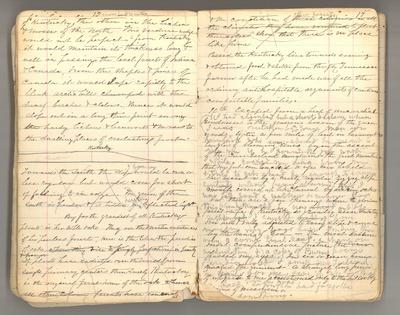 of Kentucky, the other in the lichens and mosses of the North. This verdure wedge would not be perfect - from Kentucky it would maintain its thickness long and well in passing the level forests of Indiana and Canada. From the maples and pines of Canada it would slope rapidly to the bleak Arctic hills with dwarf birches and alders. Thence it would slope out in a long thin point among the hardy lichens and liverworts and mosses to the dwelling places of everlasting frost. [Drawing of such a wedge] Towards the South the slope, I fancy, would be more or less regular, but would come far short of falling to an edge. The green of the south is harder, and is hidden in dazzling reflected light. By far the grandest of all Kentucky plants are her noble oaks. They are the master existences of her peerless forests. Here is the Eden - the paradise of oaks. Passed the Kentucky line towards evening, and obtained food and shelter from a thrifty Tennessee farmer after he had made use of all the ordinary anti-hospitable arguments of cautious comfortable families. 10th. Escaped from a heap of uncordial kindnesses to the generous bosom of the green woods. After a few miles of level in luxuriant tangles of blooming vines, began the ascent of the Cumberland mountains - the first mountains that my feet ever touched or eyes ever beheld. The ascent is by a nearly regular zigzag slope, mostly covered up like a tunnel by arching oaks, but there are a few openings where the glorious forest robe of Kentucky is grandly seen stretching over hill and valley, adjusted to every slope and curve by the hands of God, the most sublime, most comprehensive picture that ever passed my eyes. In six or seven hours reached the summit - a strangely long period of upgrade to one accustomed only to the hillocky plains of Wisconsin. I had climbed but a short distance when I was overtaken by a young man on horseback who soon showed he meant to rob me if he found the job worth while. Coaxed my bag from me and tried to get ahead far enough to examine contents without being observed. But I was too good a walker and runner for this. When he thought he was out of sight I caught him rummaging my poor bag. Finding there only a comb, towel, soap, and a change of underclothing and a copy of Burns’ poems, Paradise Lost, and [a] small New Testament, he waited for me, gave it up and went back down the road saying he had forgotten something.