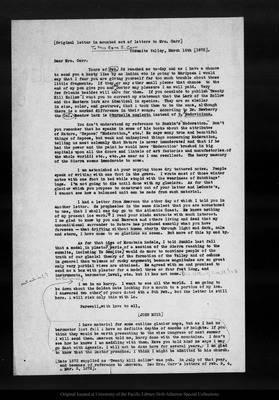 [Original letter in mounted set of letters to Mrs. Carr]To Mrs. Ezra S.CarrYosemite Valley. March 16th [1872].Dear Mrs. Carr:Yours of Feb. 26 reached me to-day and as I have a chance to send you a hasty line by an Indian who is going to Mariposa I would say that I fear you are giving yourself far too much trouble about those little fragments. If they or any other small pieces that chance to the end of my pen give you and the Doctor any pleasure I am well paid. Very few friends besides will care for them. If you conclude to publish “Twenty Hill Hollow" I want you to correct my statement that the Lark of the Hollow and the Eastern lark are identical in species. They are so similar in size, color, and gestures', that I took them to be the same, although there is a marked difference in heir songs. According to Dr. Newberry the Cal. Meadow lark is Sturnella neglecta instead of S. ludoviciana.You don't understand my reference to Ruskin's “Moderation.” Don't you remember that he speaks in some of his books about the attributes of Nature, "Repose”, "Moderation," etc! He says many true and beautiful things of Repose, but weak and uninspired things concerning Moderation, telling us most solemnly that Nature is never immoderate: and that if he had the power and the paint he would have "Moderation" brushed in big capitals upon all the doors and lintels of art factories and manufactories, of the whole world!! etc., etc., as near as I can recollect. The heavy masonry of the Sierra seems immoderate to some.I am astonished at your copying those dry tattered notes. People speak of writing with one foot in the grave. I wrote most of those winter notes with one foot in bed while stupid with the weariness of Hutchings’ logs. I'm not going to die until done with my glaciers. As for that glacier which you propose to construct out of your letter and LeConte's. I cannot see how a balanced unit can be made from such material.I had a letter from Emerson the other day of which I told you in another letter. He prophesies in the same dialect that you are accustomed to use, that I shall one day go to the Atlantic Coast. He knows nothing of my present ice work. (Eligible) I read your Hindu extracts with much interest. I am glad to know by you and Emerson and others living and dead that my unconditional surrender to Nature has produced exactly what you have foreseen — that drifting without human charts through light and dark, calm and storm. I have come to so glorious an ocean. But more of this by and by.As for that idea of Mountain Models. I told Runkle last fall that a model, in plaster of Paris, of a section of the Sierra reaching to the summits, including Yo Semite would do more to convince people of the truth of our glacial theory of the formation of the Valley and of canons in general than volumes of rocky argument; because magnitudes are so great only very partial views are obtained. He agreed with me and promised to send me a box with plaster for a model three or four feet long, and instruments, barometer, level, etc. but it has not come.I have material for some outline glacier maps, but as I had no barometer last fall I have no definite depths of canons or heights. If you think they would be worth presenting to the wise Congress of next summer I will send them. Emerson told me, hurry done with the mountains. I don't see how he knows I am meddling with them. Have you told him? He says I may go East with Agassiz. I will not be done here for several years.I am in no hurry. I want to see all the world. I am going to be down about the Golden Gate looking for a mouth to a portion of my ice. I answered two others of yours dated 4th & 8th Feb., but the letter is still here, I will risk only this with LoFarewell, with love to all,[JOHN MUIR],br>I am glad to know that the Doctor preaches. I think I might be admitted to his church.[Date 1872 supplied as "Twenty Hill Hollow" was pub. in July of that year, and because of reference to Emerson. See Mrs. Carr's letters of Feb. 3, 4, & Mar.3, 1872].