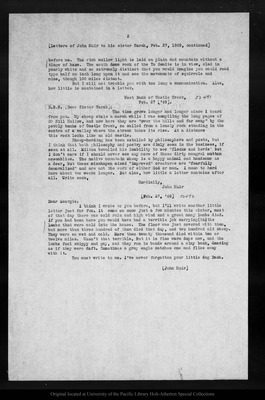 2[Letters of John Muir to his sister Sarah. Feb. 27, 1869, continued]before me. The rich mellow light is laid on plain and mountain without a tinge of haze. The south domo rock of the Yo Semite is in view, clad in pearly white and so extremely distinct that you would imagine you could read type half an inch long upon it and see the movements of squirrels and mice, though 100 miles distant.But I will not trouble you with too long a communication. Alas, how little is contained in a letter.West Bank of Castle Creek, 00491Feb. 27 ['69].D.S.S. [Dear Sister Sarah];The time grows longer and longer since I heard from you. My sheep stole a march while I was compiling the long pages of 20 Hill Hollow, and now here they are "ower the hills and far away" by the pebbly banks of Castle Creek, so called from a lonely rock standing in the centre of a valley where the stream takes its rise. At a distance this rock looks like an old castle.Sheep-herding has been extolled by philosophers and poets, but I think that both philosophy and poetry are dimly seen in the business, if seen at all. Milton bewailed his inability to see "flocks and herds" but I don't care if I should never see any more of these dirty mongrel mutton assemblies. The native mountain sheep is a happy animal and handsome as a deer, but these misshapen mixed "improved" creatures are "fearfully demoralized" and are not the work of either God or man. I mean to herd here about two weeks longer. But alas, how little a letter contains after all. Write soon,Cordially,John Muir[Feb. 27, '69] 00492Dear Georgie;I think I wrote to you before, but I'll write another little letter just for fun. It came on snow just a few minutes this winter, most of that day there was cold rain and high wind and a great many lambs died. If you had been here you would have had a terrible job carrying(in)the lambs that were cold into the house. The floor was just covered with them, but more than three hundred of them died that day, and two hundred old sheep. They were so wet and cold. More than twenty thousand died within ten or twelve miles. Wasn't that terrible, But it is fine warm days now, and the lambs feel skippy and gay, and they run in bands around a clay bank, dancing as if they were daft. Sometimes a gray eagle catches one and flies away with it.You must write to me. I've never forgotten your little dog Dash.[John Muir]