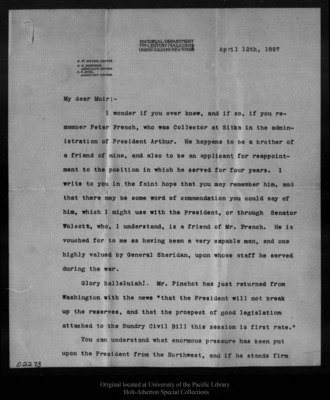 April 12th, 1897R. W. GILDER, EDITOR.R. V. JOHNSON, ASSOCIATE EDITOR. C. C. BUEL, ASSISTANT EDITOR. My dear Muir:- I wonder if you ever knew, and if so, if you remember Peter French, who was Collector at Sitka in the administration of President Arthur, He happens to be a brother of a friend of mine, and also to be an applicant for reappointment to the position in which he served for four years. I write to you in the faint hope that you may remember him, and that there may be some word of commendation you could say of him, which I might use with the President, or through Senator Wolcottt, who, I understand, is a friend of Mr. French. He is vouched for to me as having been a very capable man, and one highly valued by General Sheridan, upon whose staff he served during the war. Glory halleluiah!. Mr. Pinchot has just returned from Washington with the news "that the President will not break up the reserves, and that the prospect of good legislation attached to the Sundry Civil Bill this session is first rate." You can understand what enormous pressure has been put upon the President from the Northwest, and if he stands firm02273