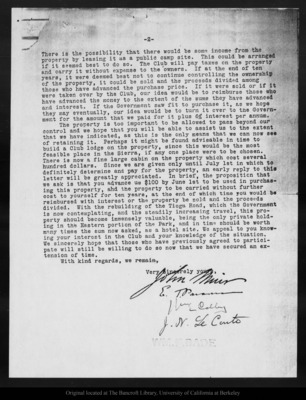 There is the possibility that there would be some income from theproperty by leasing it as a public camp site. This could be arrangedif it seemed best to do so. The Club will pay taxes on the propertyand carry it without expense to the owners. If at the end of tenyears, it were deemed best not to continue controlling the ownershipof the property, it could be sold and the proceeds divided amongthose who have advanced the purchase price. If it were sold or if itwere taken over by the Club, our idea would be to reimburse those whohave advanced the money to the extent of the sums they have advancedand interest. If the Government saw fit to purchase it, as we hopethey may eventually, our idea would be to turn it ever to the Governmentfor the amount that we paid for it plus 6% interest per annum.The property is too important to be allowed to pass beyond ourcontrol and we hope that you will be able to assist us to the extentthat we have indicated, as this is the only means that we can now seeof retaining it. Perhaps it might be found advisable in time tobuild a Club lodge on the property, since this would be the mostfeasible place in the Sierra, if any one place were to be chosen.There is now a fine large cabin on the property which cost severalhundred dollars. Since we are given only until July 1st in which todefinitely determine and pay for the property, an early reply to thisletter will be greatly appreciated. In brief, the proposition thatwe ask is that you advance us $100 by June 1st to be used in purchasingthis property, and the property to be carried without furthercost to yourself for ten years, at the end of which time you would bereimbursed with interest or the property be sold and the proceedsdivided. With the rebuilding of the Tioga Road, which the Governmentis now contemplating, and the steadily increasing travel, this propertyshould become immensely valuable, being the only private holdingin the Eastern portion of the Park, and in time should be worthmany times the sum now asked, as a hotel site. We appeal to you knowingyour interest in the Club and your knowledge of the situation.We sincerely hope that those who have previously agreed to participatewill still be willing to do so now that we have secured an extensionof time.With kind regards, we remain,Very sincerely yours,.John Muir[illegible]