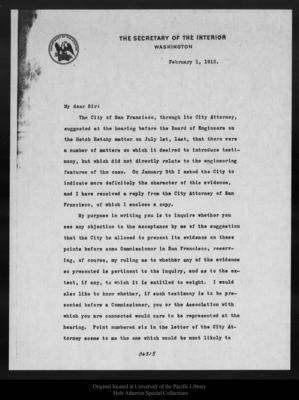 THE SECRETARY OP THE INTERIORWASHINGTONFebruary 1, 1912.My dear Sir:The City of San Francisco, through its City Attorney, suggested at the hearing before the Board of Engineers on the Hetch Hetchy matter on July 1st, last, that there were a number of matters on which it desired to introduce testimony, but which did not directly relate to the engineering features of the case. On January 5th I asked the City to indicate more definitely the character of this evidence, and I have received a reply from the City Attorney of San Francisco, of which I enclose a copy.My purpose in writing you is to inquire whether you see any objection to the acceptance by me of the suggestion that the City be allowed to present its evidence on these points before some Commissioner in San Francisco, reserving, of course, my ruling as to whether any of the evidence so presented is pertinent to the inquiry, and as to the extent, if any, to which it is entitled to weight. I would also like to know whether, if such testimony Is to be presented before a Commissioner, you or the Association with which you are connected would care to be represented at the hearing. Point numbered six in the letter of the City Attorney seems to me tho one which would be most likely to04315