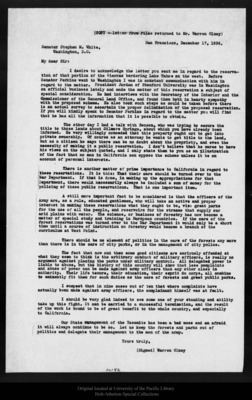 (COPY -letter from files returned to Mr. Warren Olney)San Francisco, December 17, 1896.Senator Stephen M. White,Washington, D.C.My dear Sir:I desire to acknowledge the letter you sent me in regard to the reservation of that portion of the Sierras bordering Lake Tahoe on the west. Before Senator Perkins went to Washington 1 was in constant communication with him in regard to the matter. President Jordan of Stanford University was in Washington on official business lately and made the matter of this reservation a subject of special consideration. He had interviews with the Secretary of the Interior and the Commissioner of the General Land Office, and found them both in hearty sympathy with the proposed scheme. He also took such steps as could be taken before there is an actual survey to ascertain the proper delimitation of the proposed reservation. If you will kindly speak to Senator Perkins in regard to the matter you will find that he has all the information that it is possible to obtain.The other day I had a talk with Benson, who was trying to secure the title to those lands about Gilmore Springs, about which you nave already been informed. He very willingly conceded that this property ought not to get into private ownership. Of course as an attorney he wants to get title to the land, but as a citizen he says there can be no doubt about the propriety, and even the necessity of making it a public reservation. I don't believe that he cares to have his views on the subject quoted, and I only state them to you as an illustration of the fact that no man in California can oppose the scheme unless it be on account of personal interests.There is another matter of prime importance to California in regard to these reservations. It is this: That their care should be turned over to the War Department. If that is done, in making up the appropriations for that Department, there would necessarily always be included a sum of money for the policing of these public reservations. That is one important item.A still more Important fact to be considered is that the officers of the Army are, as a rule, educated gentlemen, who will take an active and proper interest in making these reservations what they ought to be, viz: great parks for the use of all the people, and reservoirs for the streams that supply our arid plains with water. The science, or business of forestry has now become a matter of special study and training in European countries. If the care of the forest reservations was turned over to the War Department it would only be a short time until a course of instruction on forestry would become a branch of the curriculum at West Point.There should be no element of politics in the care of the forests any more than there is in the care of city parks, or in the management of city police.The fact that now and then some good citizens are seriously offended at what they seem to think is the arbitrary conduct of military officers, is really no argument against placing the parks under military control. All delegated power is liable to abuse, but the history of this country will show that less complaints and abuse of power can be made against army officers than any other class in authority. Their life tenure, their education, their esprit du corps, all combine to eminently fit them for such duties as the care of forests and great public parks.I suspect that in nine cases out of ten that where complaints have actually been made against army officers, the complainant himself was at fault.I should be very glad indeed to see some one of your standing and ability take up this fight. It can be carried to a successful termination, and the result of the work is bound to be of great benefit to the whole country, and especially to California.Our State management of the Yosemite has been a bad mess and am afraid it will always continue to be so. Let us keep the forests and parks out of politics and delegate their management to the men of the army.Yours truly,(Signed) Warren Olney06182