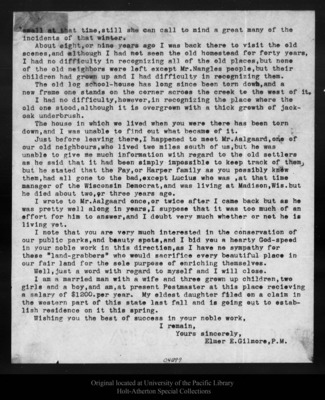 small at that time,still she can call to mind a great many of the incidents of that winter.About eight,or nine years ago I was back there to visit the old scenes,and although I had net seen the old homestead for forty years, I had no difficulty in recognizing all of the old places,but none of the old neighbors were left except Mr.Nangles people,but their children had grown up and I had difficulty in recognizing them.The old log school-house has long since been torn down,and a new frame one stands on the corner across the creek to the west of it.I had no difficulty,however,in recognizing the place where the old one stood,although it is overgrown with a thick growth of jack-oak underbrush.The house in which we lived when you were there has been torn down,and I was unable to find out what became of it.Just before leaving there,I happened to meet Mr. Aalgaard, one of our old neighbours,who lived two miles south of us,but he was unable to give me much information with regard to the old settlers as he said that it had been simply impossible to keep track of themj but he stated that the Fay,or Harper family as you possibly knew them,had all gone to the bad,except Lucius who was,at that time manager of the Wisconsin Democrat,and was living at Madison,Wis.but he died about two,or three years ago.I wrote to Mr.Aalgaard once,or twice after I came back but as he was pretty well along in years,I suppose that it was too much of an effort for him to answer,and I doubt very much whether or not he is living yet.I note that you are very much interested in the conservation of our public parks,and baauty spots,and I bid you a hearty God-speed in your noble work in this direction,as I have no sympathy for these "land-grabbers" who would sacrifice every beautiful place in our fair land for the sole purpose of enriching themselves.Well,just a word with regard to myself and I will close.I am a married man with a wife and three grown up children,two girls and a boy,and am,at present Postmaster at this place recieving a salary of $1200.per year. My eldest daughter filed on a claim in the western part of this state last fall and is going out to establish residence on it this spring.Wishing you the best of success in your noble work,I remain,Yours sincerely,Elmer E.Gilmore,P.M.04699