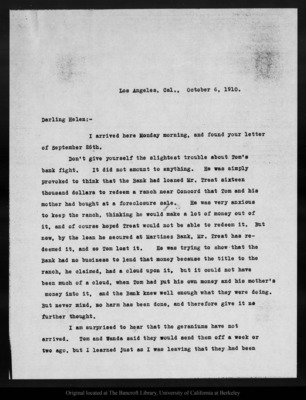 Los Angeles. Cal., October 6, 1910.Darling Helen:-I arrived here Monday morning, and found your letter of September 26th.Don't give yourself the slightest trouble about Tom's bank fight. It did not amount to anything. He was simply provoked to think that the Bank had loaned Mr. Treat sixteen thousand dollars to redeem a ranch near Concord that Tom and his mother had bought at a foreclosure sale. He was very anxious to keep the ranch, thinking he would make a lot of money out of it, and of course hoped Treat would not be able to redeem it. But now, by the loan he secured at Martinez Bank, Mr. Treat has redeemed it, and so Tom lost it. He was trying to show that the Bank had no business to lend that money because the title to the ranch, he claimed, had a cloud upon it, but it oould not have been much of a cloud, when Tom had put his own money and his mother'smoney into it, and the Bank knew well enough what they were doing. But never mind, no harm has been done, and therefore give it no further thought.I am surprised to hear that the geraniums have not arrived. Tom and Wanda said they would send them off a week or two ago, but I learned just as I was leaving that they had been