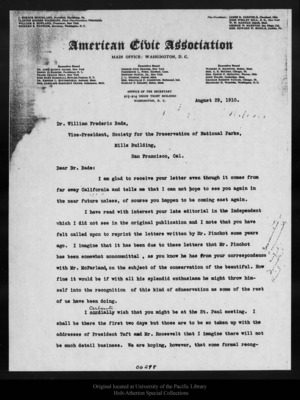 J. HORACE McFARLAND, President, Harrisburg, Pa.CLINTON ROGERS WOODRUFF, First Vice-President, PhiladelphiaWILLIAM B. HOWLAND. Treasurer, New YorkRICHARD B. WATROUS, Secretary, Washington, D. C.Vice-Presidents: JAMES R. GARFIELD, Cleveland, OhioJOHN WESLEY HILL, D. D., New YorkW. W. HANNAN. Detroit, Mich.GEORGE W. MARSTON, San Diego, Cal.MRS. EDWARD W. BIDDLE, Carlisle, Pa.American Civic AssociationMAIN OFFICE: WASHINGTON, D. C.Executive BoardDR. JOHN QUINCY ADAMS, New YorkHENRY A. BARKER, Providence, R. I.FRANK CHAPIN BRAY, New YorkMISS MARY MARSHALL BUTLER, Yonkers, N. Y.DR. KENYON L. BUTTERFIELD, Amherst, Mass.MRS. CAROLINE BARTLETT CRANE, Kalamazoo, Mich.Executive BoardGEORGE OTIS DRAPER, New YorkFREDERICK L. FORD. Hartford. Conn.EDWARD HATCH, JR., New YorkJ. L. HUDSON, Detroit, Mich.MRS. MELVILLE F. JOHNSTON, Richmond, Ind.HARLAN P. KELSEY, Salem, Mass.Executive BoardWARREN H. MANNING, Boston. Mass.MRS. A. E. McCREA, Chicago, III.MRS. EDWIN F. MOULTON, Warren, OhioJOHN NOLEN, Cambridge, Mass.GRAHAM ROMEYN TAYLOR, Chicago, III.BRAINARD H. WARNER, Washington, D. C.OFFFICE OF THE SECRETARY913-914 UNION TRUST BUILDINGWASHINGTON, D. C.August 29, 1910.Dr. William Frederic Bade,Vice-President, Society for the Preservation of National Parks,Mills Building,San Francisco, Cal.Dear Dr. Bade:I am glad to receive your letter even though it comes from far away California and tells me that I can not hope to see you again in the near future unless, of course you happen to be coming east again.I have read with interest your late editorial in the Independent which I did not see in the original publication and I note that you have felt called upon to reprint the letters written by Mr. Pinchot some years ago. I imagine that it has been due to these letters that Mr. Pinchot has been somewhat noncommittal, as you know he has from your correspondence with Mr. McFarland, on the subject of the conservation of the beautiful. How fine it would be if with all his splendid enthusiasm he might throw himself into the recognition of this kind of conservation as some of the rest of us have been doing.I certainly[word?] wish that you might be at the St. Paul meeting. I shall be there the first two days but those are to be so taken up with the addresses of President Taft and Mr. Roosevelt that I imagine there will not be much detail business. We are hoping, however, that some formal recog-06298