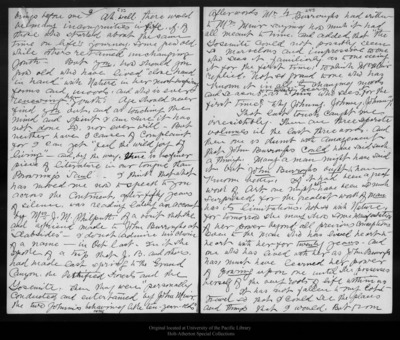 3 [3]brings before me. Ah well, there would be many incongruities in life, if of those who started about the same time on life's journey, some grew old- while others retained unchanging youth- But you, how should you grow old who have lived "close hand in hand" with Nature in her most inspiring forms and woods, and who is ever renewing her youth? Age should never find you out, and as touching the mind and spirit I am sure it has not done so, nor ever will - But neither have I cause of complaint, for I can yet "feel the wild joy of living" - and, by the way, there is no finer piece of literature in our tongue than Browning's "[Soul?]". - I think that what has moved me now to speak to you across the continent, after fifty years of silence, was reading lately an account by Mrs J. M. Philputt, of a visit that she and a friend made to John Burroughs at "[Slabsides?]" - I do not admire his choice of a name - in Oct' last, In it she spoke of a trip that J. B. and others, had made last spring to the Grand Canyon, the Petrified Forests and the Yosemite, there they were "personally conducted and entertained by John Muir, the two Johnnies behaving like ten-year-olds"047054 [4]afterwards Mr. Burroughs had written Mr. Muir saying how much it had all meant to him, and added that "the Yosemite could not possibly seem so marvelous and impressive to one who sees it familiarly as to one seeing it for the first time; to which Mr Muir replied "Not so grand to me who has known it in all its changing moods and seasons for twenty years as to him who sees it for the first time? Why Johnny, Johnny, Johnny"!That last touch caught me irresistibly. There are three separate volumes in the last three words. And there one is dumb with amazement that John Burroughs could have said such a thing. Many a man might have said it, but John Burroughs ought to have known better. If it had been a great work of art, one might not have been so much surprised, for the greatest work of man has its limitations. Not so with Nature, for tomorrow she may show some manifestation of her power beyond all previous conceptions, even to the man who has lived heart to heart with her for twenty years - and one who has lived with her as John Burroughs has, must have learned her power of growing upon one until she possesses herself of the very roots of life within usIt has not fallen to my lot to travel so that I could see the places and things that I would. But from