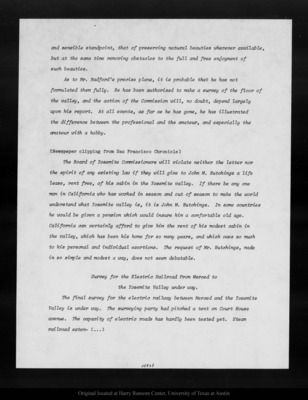 and sensible standpoint, that of preserving natural beauties wherever available, but at the same time removing obstacles to the full and free enjoyment of such beauties.As to Mr. Radford's precise plans, it is probable that he has not formulated them fully. Re has been authorized to make a survey of the floor of the valley, and the action of the Commission will, no doubt, depend largely upon his report. At all events, as far as he has gone, he has illustrated the difference between the professional and the amateur, and especially the amateur with a hobby.[Newspaper clipping from San Francisco Chronicle]The Board of Yosemite Commissioners will violate neither the letter nor the spirit of any existing law if they will give to John M. Hutchings a life lease, rent free, of his cabin in the Yosemite valley. If there be any one man in California who has worked in season and out of season to make the world understand what Yosemite valley is, it is John M. Hutchings. In some countries he would be given a pension which would insure him a comfortable old age. California can certainly afford to give him the rent of his modest cabin in the valley, which has been his home for so many years, and which owes so much to his personal and individual exertions. The request of Mr. Hutchings, made in so simple and modest a way, does not seem debatable.Survey for the Electric Railroad From Merced to the Yosemite Valley under way. The final survey for the electric railway between Merced and the Yosemite Valley is under way. The surveying party had pitched a tent on Court House avenue. The capacity of electric roads has hardly been tested yet. Steam railroad exten-[...]00863