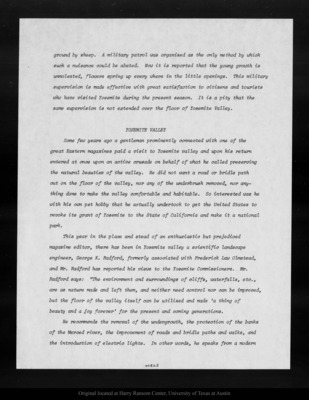 ground by sheep. A military patrol was organized as the only method by which such a nuisance could be abated. Now it is reported that the young growth is unmolested, flowers spring up every where in the little openings. This military supervision is made effective with great satisfaction to citizens and tourists who have visited Yosemite during the present season. It is a pity that the same supervision is not extended over the floor of Yosemite Valley.YOSEMITE VALLEYSome few years ago a gentleman prominently connected with one of the great Eastern magazines paid a visit to Yosemite valley and upon his return entered at once upon an active crusade on behalf of what he called preserving the natural beauties of the valley. He did not want a road or bridle path cut on the floor of the valley, nor any of the underbrush removed, nor anything done to make the valley comfortable and habitable. So interested was he with his own pet hobby that he actually undertook to get the United States to revoke its grant of Yosemite to the State of California and make it a national park.This year in the place and stead of an enthusiastic but prejediced magazine editor, there has been in Yosemite valley a scientific landscape engineer, George K. Radford, formerly associated with Frederick Law Olmstead, and Mr. Radford has reported his views to the Yosemite Commissioners. Mr. Radford says: “The environment and surroundings of cliffs, waterfalls, etc., are as nature made and left them, and neither need control nor can be improved, but the floor of the valley itself can be utilized and made 'a thing of beauty and a joy forever for the present and coming generations.He recommends the removal of the undergrowth, the protection of the banks of the Merced river, the improvement of roads and bridle paths and walks, and the introduction of electric lights. In other words, he speaks from a modem00863