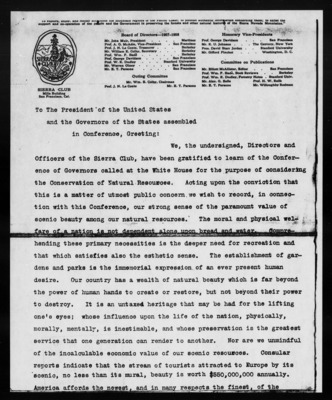 to explore, enjoy, and render [illegible] the mountain regions 0f the [illegible] Coast; to [illegible] authentic [illegible]concerning them; to enlist the support and co-operation of the palple and the Government in preserving the forests and other natural features of the Sierra Nevada Mountains."SIERRA CLUBMills Building San Francisco, Cal.Board of Directors—1907-1908Mr. John Muir, President Martinei Prof.A. G. McAdie, Vice-President San FranciscoProf. J. N.'Le Conte. Treasurer BerkeleyMr. William E. Colby. Secretary BerkeleyProf. Wm. P. Bade BerkeleyProf. George Davidson San FranciscoProf. W. R. Dudley Stanford UniversityMr. Warren Olney San FranciscoMr. E. T. Parsons San FranciscoOuting CommitteeMr. Wm. E. Colby, ChairmanProf. J. N. Le Conte Mr. E. T. ParsonsHonorary Vice-PresidentsProf. George Davidson San FranciscoMr. R. U. Johnson The Century, New YorkPres. David Starr Jordan Stanford UniversityMr. Gilford Pinchot Washington, D. C.Committee on PublicationsMr. Elliott McAllister Editor San FranciscoProf. Wm. P. Bade. Book Reviews BerkeleyProf. Wm. R. Dudley, Forestry Notes Stanford Univ.Mr. Alex. O. Eells Prof. H. W. RolfeMr. E. T. Parsons Mr. Willoughby RodmanTo The President of the United Statesand the Governors of the States assembled in Conference, Greeting:We, the undersigned, Directors and Officers of the Sierra Club, have been gratified to learn of the Conference of Governors called at the White House for the purpose of considering the Conservation of Natural Resources. Acting upon the conviction that this is a matter of utmost public concern, we wish to record, in connection with this Conference, our strong sense of the paramount value of scenic beauty among our natural resources. The moral and physical welfare of a nation in not dependent alone upon bread and water. Comprehending these primary necessities is the deeper need for recreation and that which satisfies also the esthetic io sense. The establishment of gardens and parks is the immemorial expression of an ever present human desire. Our country has a wealth of natural beauty which is far beyond the power of human hands to create or restore, but not beyond their power to destroy. It is an it is an untaxed heritage that may be had for the lifting one's eyes; whose influence upon the life of the nation, physically, morally, mentally, is inestimable, and whose preservation is the greatest service that one generation can render to another. Nor are we unmindful of the incalculable economic value of our scenio resources. Consular reports indicate that the stream of tourists attracted to Europe by its scenic, no less than its mural, beauty is worth $550,000,000 annually.America affords the newest, and in many respects the finest, of the