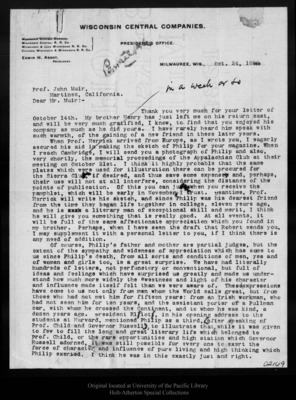 WISCONSIN CENTRAL COMPANIES.PRESIDENT OFFICE.WISCONSIN CENTRAL COMPANYWISCONSIN CENTRAL R. R. CO.MILWAUREE & WINNEBAGO R. R. CO.CHICAGO, WISCONSIN MINNESOTA R. R. CO.EDWIN H. ABBOT,PRESIDENT.MILWAUKEE, WIS., Oct. 24, 1896.Prof. John Muir,Martinez, California.Dear Mr. Muir:-Thank you very much for your letter of October 14th. My brother Henry has just left me on his return east, and will be very much gratified, I know, to find that you enjoyed his company as much as he did yours. I have rarely heard him speak with such warmth, of the gaining of a new friend in these later years.When Prof. Herrick arrived from Europe, as I wrote you, I eagerly secured his aid in making the sketch of Philip for your magazine. When I reach Cambridge, I will send you a photograph of Philip and also, very shortly, the memorial proceedings of the Appalachian Club meeting on October 21st. I think it highly probable that the same plates which were used for illustration there can be procured for the Sierra Club, if desired, and thus save some expense, and, perhaps, their use will not at all interfere, considering the distance points of publication. Of this you can judge when you receive pamphlet, which will be early in Novembers I trust.Meantime, Prof. Herrick will write his sketch, and since Philip was his dearest friend from the time they began life together in college, eleven years ago, and he is a literary man of exceptional skill and merit, I think he will give you something that is really good. At all events, it will be full of the same affectionate appreciation which you found in my brother. Perhaps, when I have seen the draft that Robert sends you, I may supplement it with a personal letter to you, if I think there is any need of addition.Of course, Philip's father and mother are partial judges, but the extent of the sympathy and wideness of appreciation which has some to us since Philip's death, from all sorts and conditions of men, yes and of women and girls too, is a great surprise. We have had literally hundreds of letters, not perfunctory or conventional, but full of ideas and feelings which have surprised us greatly and made us understand how much more widely the sweetness and light of his character and influence made itself felt than we were aware of. These expressions have come to us not only from men whom the World calls great, but from those who had not met him for fifteen years: from an Irish workman, who had not seen him for ten years, and the assistant porter of a Pullman car, with whom he crossed the Continent, and to whom he was kind, a dozen years ago. President Eliot, in his opening address to the students at Harvard, mentioned Philip as a third, after speaking of Prof. Child, and Governor Russell, to illustrate that while it was given to few to fill the long and great literary life which belonged to prof. Child, or the rare opportunities and high station which Governor Russell adorned, it was still possible for every one to exert the force of character and influence of pure living and high Philip exerted. I think he was in this exactly just and right