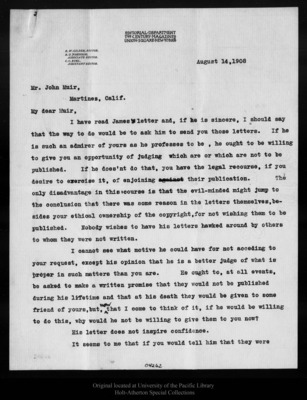 R.w.GILDER, EDITOR,R.U.JOHNSON.ASSOCIATE EDITOR.C.C.BUEL,ASSISTANT EDITOR.August 14,1908Mr. John Muir,Martinez, Calif.My dear Muir,I have read James's letter and, if he is sincere, I should say that the way to do would he to ask him to send you those letters. If he is such an admirer of yours as he professes to he , he ought to he willing to give you an opportunity of Judging which are or which are not to he published. If he does'nt do that, you have the legal recourse, if you desire to exercise it, of enjoining against their publication. The only disadvantage in this course is that the evil-minded might jump to the conclusion that there was some reason in the letters themselves,besides your ethical ownership of the copyright, for not wishing them to be published. Nobody wishes to have his letters hawked around by others to whom they were not written.I cannot see what motive he could have for not acceding to your request, except his opinion that he is a better judge of what is proper in such matters than you are. He ought to, at all events, be asked to make a written promise that they would not be published during his lifetime and that at his death they would be given to some friend of yours,but, now that I come to think of it, if he would be willing to do this, why would he not be willing to give them to you now?His letter does not inspire confidence.It seems to me that if you would tell him that they were04262