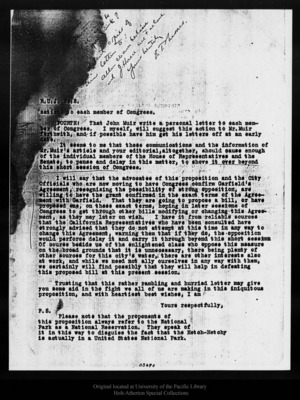 [Illegible]sations to each member of Congress.
FOURTH:That John Muir write it-personal letter to each member of Congress. I myself, will suggest this action to Mr.Muir forthwith, and if possible have him got his letters off at an early date.
It seems to me that these communications and the information of Mr. Muir's article and your editorial,altogether, should cause enough of the individual members of the House of Representativesand the Senate, to pause and delay in this matter, to shove it over beyond this short session of Congress.
I will say that the advocates of this proposition and the City officials who are now moving to have Congress confirm Garfield's Agreement, recognizing the possibility of strong opposition, are willing to have the grant confirmed in the exact terms of the Agreement with Garfield.That they are going to propose a bill, or have proposed one, on these exact terms, hoping in later sessions of Congress to get through other bills modifying or changing this Agreement, as they may later on wish. I have it from reliable sources that the California Representatives who have been consulted hare strongly advised that they do not attempt at this time in any way to change this Agreement, warning them that if they do, the opposition would perforce delay it and carry it through beyond this short session Of course beside us of the enlightened class who oppose this measure on the broad grounds that it is unnecessary, there being plenty of other sources for this city's water, there are other interests also at work, and while we need not ally ourselves in any way with them, we certainly will find possibly that they will help in defeating this proposed bill at this present session.
Trusting that thisrather rambling and hurried letter may give you some aid in the fight we all of us are making in this iniquitous proposition, and with heartiest best wishes, I am-

P. S.Please note that the proponents of this proposition always refer to the National Park as a national Reservation. They speak of it in this way to disguise the fact that the Hetch-Hetchy is actually in a United States National Park.