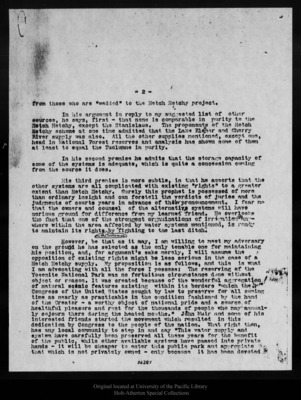 - 2 -from those who are "wedded" to the Hetch Hetchy project.In his argument in reply to my suggested list of other sources, he says, first - that none is comparable in purity to the Hetch Hetchy, except the Stanislaus. The proponents of the Hetch Hetchy scheme at one time admitted that the Lake Eleanor and Cherry River supply was also. All the other supplies mentioned, except one, head in National Forest reserves and analysis has shown some of them at least to equal the Tuolumne in purity.In his second premise he admits that the storage capacity of some of the systems is adequate, which is quite a concession coming from the source it does.His third premise is more subtle, in time he asserts that the other systems are all complicated with existing "rights" to a greater extent than Hetch Hetchy. Surely this prophet is possessed of more than ordinary insight and can foretell the verdicts of juries and the judgments of courts years in advance of their pronouncement. I fear me that the owners and counsel of the alternative systems will have serious ground for difference from my learned friend. He overlooks the fact that one of the strongest organisations of irrigation anywhere within the area affected by water systems mentioned, is ready to maintain its rights on the Tuolumne by "fighting to the last ditch."However, be that as it may, I am willing to meet my adversary on the ground he has selected as the only tenable one for maintaining his position, and, for argument's sake merely, I will assume the opposition of existing rights might be less serious in the case of a Hetch Hetchy supply. My proposition is as follows, and this is what I am advocating with all the force I possess: The reserving of the Yosemite National Park was no fortuitous circumstance done without object or reason. It was created because of the wonderful aggregation of natural scenic features existing within its borders "which the Congress of the United States sought by law to preserve for all coming time as nearly as practicable in the condition fashioned by the hand of the Creator - a worthy object of national pride and a source, of healthful pleasure and rest for the thousands of people who may annually sojourn there during the heated mouths." John Muir and some of his interested friends started the movement which resulted in this dedication by Congress to the people of the nation. What right then, has any local community to step in and say "This water supply and system have carefully been preserved all these years for the benefit of the public, while other available systems have passed into private hands - it will be cheaper to enter this public park and appropriate that which is not privately owned - only because it has been devoted06281