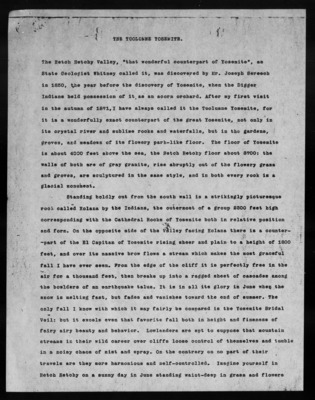 THE TUOLUMNE YOSEMITE.The Hetch Hetchy Valley, "that wonderful counterpart of Yosemite", as State Geologist Whitney called it, was discovered by Mr. Joseph Sereech in 1850, the year before the discovery of Yosemite, when the Digger Indians held possession of it as an acorn orchard. After my first visit in the autumn of 1871, I have always called it the Tuolumne Yosemite, for it is a wonderfully exact counterpart of the great Yosemite, not only in its crystal river and sublime rocks and waterfalls, but in the gardens, groves, and meadows of its flowery park-like floor. The floor of Yosemite is about 4000 feet above the sea, the Hetch Hetchy floor about 3700: the walls of both are of gray granite, rise abruptly out of the flowery grass and groves, are sculptured in the same style, and in both every rock is a glacial monument.Standing boldly out from the south wall is a strikingly picturesque rock, called Kolana by the Indians, the outermost of a group 2300 feet high corresponding with the Cathedral Rocks of Yosemite both in relative position and form. On the opposite side of the Valley facing Kolana there is a counterpart of the El Capitan of Yosemite rising sheer and plain to a height of 1800 feet, and over its massive brow flows a stream which makes the most graceful fall I have ever seen. From the edge of the cliff it is perfectly free in the air for a thousand feet, then breaks up into a ragged sheet of cascades among the bowlders of an earthquake talus. It is in all its glory in June when the snow is melting fast, but fades and vanishes toward the end of summer. The only fall I know with which it may fairly be compared is the Yosemite Bridal Veil: but it excels even that favorite fall both in height and fineness of fairy airy beauty and behavior. Lowlanders are apt to suppose that mountain streams in their wild career over cliffs loose control of themselves and tumble in a noisy chaos of mist and spray. On the contrary on no part of their travels are they more harmonious and self-controlled. Imagine yourself in Hetch Hetchy on a sunny day in June standing waist-deep in grass and flowers