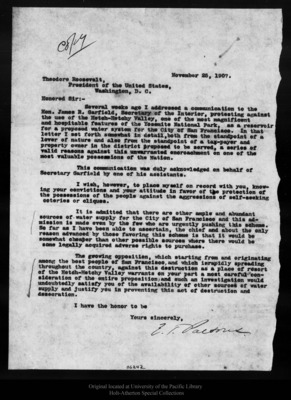 [illegible]November 25, 1907.Theodore Roosevelt,President of the United States,Washington. D. C.Honored Sir:Several weeks ago I addressed a communication to the Hon. James R. Garfield, Secretary of the Interior, protesting against the use of the Hetch-Hetchy Valley, one of the most magnificent and hospitable features of the Yosemite National Park, as a reservoir for a proposed water system for the City of San Francisco. In that letter I set forth somewhat in detail, both from the standpoint of a lover of nature and also from the standpoint of a tax-payer and property owner in the district proposed to be served, a series of valid reasons against this unwarranted encroachment on one of the most valuable possessions of the Nation.This communication was duly acknowledged on behalf of Secretary Garfield by one of his assistants.I wish, however, to place myself on record with you, knowing your convictions and your attitude in favor of the protection of the possessions of the people against the aggressions of self-seeking coteries or cliques.It is admitted that there are other ample and abundant sources of water supply for the City of San Francisco and this admission is made even by the few who are urgently pushing this scheme. So far as I have been able to ascertain, the chief and about the only reason advanced by those favoring this scheme is that it would be somewhat cheaper than other possible sources where there would be some legally acquired adverse rights to purchase.The growing opposition, which starting from and originating among the best people of San Francisco, and which is rapidly spreading throughout the country, against this destruction as a place of resort of the Hetch-Hetchy Valley warrants on your part a most careful consideration of the entire proposition; and such an investigation would undoubtedly satisfy you of the availability of other sources of water supply and justify you in preventing this act of destruction and desecration.I have the honor to beYours sincerely,[illegible]06242