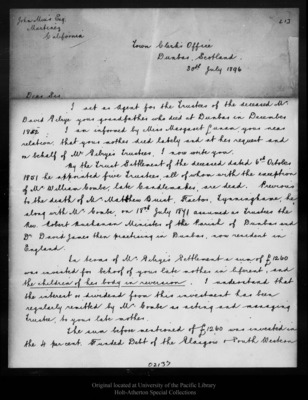 John Muir Esq.MartinezCalifornia[1]Town Clerk's OfficeDunbar, Scotland30th July 1896Dear Sir.I act as agent for the Trustees of the deceased M. David Gilrye your grandfather who died at Dunbar in December 1852: I am informed by Miss Margaret Lunam, your near relation, that your mother died lately and at her request and on behalf of Mr. Gilrye's Trustees, I now write you.By the Trust Settlement of the deceased dated 6st October 1851 he appointed five Trustees, all of whom with the exception of M. William Combe, late Candlemaker, are dead. Previous to the death of M. Matthew Buist, Factor, Lynninghame, he along with Mr. Combe, on 18th July 1841 assumed as Trustees the Rev. Robert Buchanan Minister of the Parish of Dunbar and Dr. David James them practicing in Dunbar, now resident in England.In terms of Mr. Gilrye's Settlement a sum of 1260 pounds was invested for behoof of your late mother in liferent, and the children of her body in revesion. I understand that the interest or divided from this investment has regularly remitted by Mr. Combe as acting and managing Trustee, to your late mother.The sum before mentioned of 1260 pounded was invested in the 4 percent. Funded Debt of the Glasgow & South Western02137