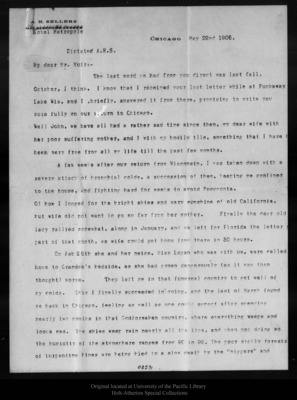 A. H. SELLERSHotel MetropoleChicago May 22nd 1905. Dictated A.H.S.My dear Mr. Muir:- The last word we had from you direct was last fall.October, I think. I know that I received your last letter while at Fuckaway Lake Wis, and I. briefly, answered it from there, promising to write you more fully on our return to Chicago. Well John, we have all had a rather sad time since then, my dear wife with her poor suffering mother, and ! with my bodily ills, something that I have been very free from all try life till the past few months. A few weeks after our return from Wisconsin, I was taken down with a severe attack of bronchial colds, a succession of them, keeping me confined to the house, and fighting hard for weeks to avoid Pneumonia,0! how I longed for the bright skies and warm sunshine of old California,but wife die not want to go so far from her mother. Finally the dear old lady rallied somewhat, along in January. we left for Florida the .latter part of that month, as wife could get home from there in 30 hours. On Feb 25th she and her neice. Miss Logan who was with us. were called hone to Grandma's bedside, as she had grown dangerously (as it was then thought) worse. They left ire in that funereal country to get well of my colds. This I finally succeeded in doing, and the last of March found me back in Chicago, feeling as wall as one could expect after spending nearly two months in that Godforsaken country, where everything weeps and looks sad. The skies were rain nearly all the time. and when not doing so the humidity of the atmosphere ranges from 90 to 99. The poor sickly forests of turpentine Fines are being bled to a slow death by the "niggers" and