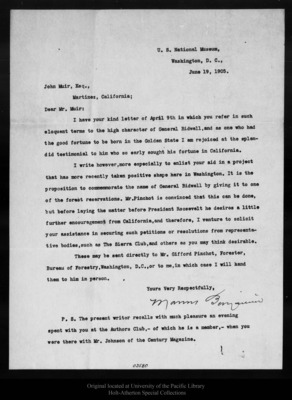 U. S. National Museum, Washington, D. CJune 19, 1905. John Muir, Esq. Martinez, California; Dear Mr. Muir:I have your kind letter of April 9th in which you refer in such eloquent terms to the high character of General Bidwell,and as one who had the good fortune to be born in the Golden State I am rejoiced at the splendid testimonial to him who so early sought his fortune in California. I write however, more especially to enlist your aid in a project that has more recently taken positive shape here in Washington. It is the proposition to commemmorate the name of General Bidwell by giving it to one of the forest reservations. Mr. Pinchot is convinced that this can be done,but before laying the matter before President Roosevelt he desires a little further encouragement from California, and therefore, I venture to solicit your assistance in securing such petitions or resolutions from representative bodies, such as The Sierra Club, and others as you may think desirable. These may be sent directly to Mr. Gifford Pinchot, Forester,Bureau of Forestry, Washington, D.C.,or to me, in which case I will hand them to him in person. Yours Very Respectfully, P. S. The present writer recalls with much pleasure an evening spent with you at the Authors Club,- of which he is a member,- when you were there with Mr. Johnson of the Century Magazine.