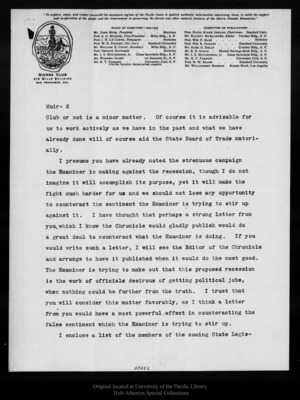 "To explore, enjoy, and render accessible the mountain regions of the Pacific Coast; to publish authentic information concerning them; to enlist the support and co-operation of the people and the Government in preserving the forests and other natural features of the Sierra Nevada Mountains."BOARD OF DIRECTORS-1904-1905Mr. JOHN MUIR, President MartinezProf. A. G. McADIE, Vice-President Mills Bldg., S. F.Prof. J. N. LE CONTE, Treasurer BerkeleyProf. W. R. DUDLEY, Cor. Sec'y Stanford UniversityMr. WILLIAM E COLBY, Secretary Mills Bldg., S. F.Prof. GEORGE DAVIDSON BerkeleyMr. J. S. HUTCHINSON, Jr. Claus Spreckels Bldg., S. F.Mr. WARREN OLNEY 101 Sansome St., S. F.Mr. E. T. PARSONS University Club, S. F.(Vice Mr. ELLIOTT McALLISTER, resigned)COMMITTEE ON PUBLICATIONS:Pres. DAVID STARR JORDAN, Chairman Stanford Univ.Mr. ELLIOTT McALLISTER, Editor Crocker Bldg., S. F.Prof. WM. F. BADE BerkeleyProf WM. R. DUDLEY Stanford UniversityMr. ALEX. G. EELLS Crocker Bldg., S. F.Mr. E. B. GOULD Mutual Savings Bank Bldg., S. F.Mr. J. S. HUTCHINSON, Jr. Claus Spreckels Bldg., S. F.Mr. E. T. PARSONS University Club, S. F.Prof. H. W. ROLFE Stanford UniversityMr. WILLOUGHBY RODMAN Bryson Block, Los AngelesSIERRA CLUB316 MILLS BUILDINGSAN FRANCISCO, CAL.Muir-2Club or not is a minor matter. Of course it is advisable for us to work actively as we have in the past and what we have already done will of course aid the State Board of Trade materially.I presume you have already noted the strenuous campaign the Examiner is making against the recession, though I do not imagine it will accomplish its purpose, yet it will make the fight much harder the sentiment the Examiner is trying to stir up against it. I have thought that perhaps a strong letter from you, which I know the Chronicle would gladly publish would do a great deal to counteract what the Examiner is doing. If you would write such a letter, I will see the Editor of the Chronicle and arrange to have it published when it would do the most good. The Examiner is trying to make out that this proposed recession is the work of officials desirous of getting political jobs, when nothing could be further from the truth. I trust that you will consider this matter favorably, as I think a letter from you would have a most powerful, effect in counteracting the false sentiment which the Examiner is trying to stir up.I enclose a list of the members of the coming State Legis-03482