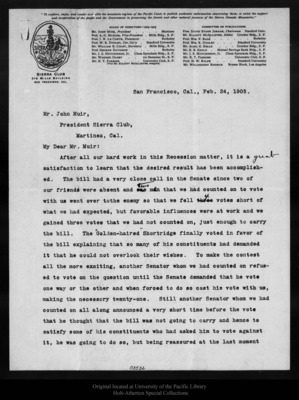 "To explore, enjoy, and render accessible the mountain regions of the Pacific Coast; to publish authentic information concerning them; to enlist the support and co-operation of the people and the Government in preserving the forests and other natural features of the Sierra Nevada Mountains." [illegible] BOARD OF DIRECTORS—1904-1905Mr. JOHN MUIR, President .... MartinezProf. A. G. MCADIE, Vice-President . Mills Bldg., S. F. Prof. J. N. LE CONTH, Treasurer . BerkeleyProf. W. R. DUDLEY, Cor.Sec’y . Stanford UniversityMr. WILLIAM E. COLBY, Secretary . Mills Bldg., S. F. Prof. GEORGE DAVIDSON ..BerkeleyMr. J. S. HUTCHINSON, Jr. Claus Spreckels Bldg., S. F. Mr. WARREN OLNEY . IOI Sansome St., S. F. Mr. E. T. PARSONS . . University Club, S. F. (Vice Mr. ELLIOTT MCALLISTER, resigned) COMMITTEE ON PUBLICATIONS: Pres. DAVID STARR JORDAN, Chairman Stanford Univ. Mr. ELLIOTT MCALLISTER, Editor Crocker Bldg., S. F. Prof. WM. F. BADE. . . . . . . . . . BerkeleyProf. WM. R. DUDLEY . . . Stanford UniversityMr. ALEX. G. EELLS . . . Crocker Bldg., S. F. Mr. E. B. GOULD . Mutual Savings Bank Bldg., S. F. Mr. J. S. HUTCHINSON, Jr. Claus Spreckels Bldg., S. F. Mr. E. T. PARSONS University Club, S. F. Prof. H. W. ROLFE . . . Stanford UniversityMr. WILLOUGHBY RODMAN Bryson Block, Los AngelesSan Francisco, Cal., Feb. 24, 1905. Mr. John Muir, President Sierra Club, Martinez, Cal. My Dear Mr. Muir: After all our hard work in this Recession matter, it is a great satisfaction to learn that the desired result has been accomplished. The bill had a very close call in the Senate since two of our friends were absent and two men that we had counted on to vote with us went over to the enemy so that we fell 4 votes short of what we had expected, but favorable influences were at work and we gained three votes that we had not counted on, just enough to carry the bill. The "Golden-haired" Shortridge finally voted in favor of the bill explaining that so many of his constituents had demanded it that he could not overlook their wishes. To make the contest all the more exciting, another Senator whom we had counted on refused to vote on the question until the Senate demanded that he vote one way or the other and when forced to do so cast his vote with us, making the necessary twenty-one. Still another Senator whom we had counted on all along announced a very short time before the vote that he thought that the bill was not going to carry and hence to satisfy some of his constituents who had asked him to vote against it, he was going to do so, but being reassured at the last moment03532