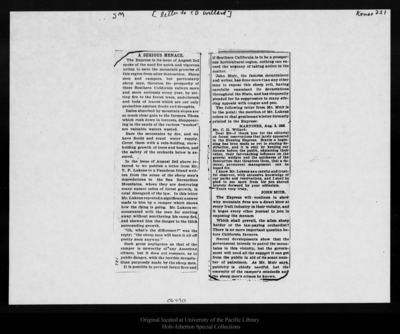 [illegible]A, SERIOUS MENACE.The Express In its Issue of August 2nd spoke of the need for quick and vigorous action to save the mountain growths of this region from utter destruction. Sheep men and campers, but particularly sheep men, threaten the prosperity of these Southern California valleys more and more seriously every year, by setting fire to the forest trees, underbrush and beds of leaves which are our only protection against floods and droughts.Rains absorbed by mountain slopes are' so much clear gain to the farmers. Those which rush down in torrents, disappearing in the sands of the various "washes" are valuable waters wasted.Bare the mountains by fire, and we have floods and scant water supply. Cover them with a rain-holding, snow-holding growth of trees and bushes, and the safety of the orchards below is assured.In the Issue of August 2nd above referred to we publish a letter from Mr. T. P. Lukens to a Pasadena friend writ-ten from the scene of the sheep men's depredations in the San Bernardino Mountains, where they are destroying many square miles of forest growth, in total disregard of the law. In this letter Mr. Lukens repeated a significant answer made to him by a camper which shows how the thing is going. Mr. Lukens remonstrated with the man for starting away without smothering his camp fire, and showed him the danger to the thick surrounding growth."Oh, what's the difference?" was the reply; "the sheep men will burn it all off pretty soon anyway."Such gross negligence as that of the camper is unworthy of any American Citizen; but it dors not compare, as to public danger, with the terrible devastations purposely made by the sheep men.It is possible to prevent forest fires and if Southern California is to be a prosperous horticultural region, nothing can exceed the urgency of taking action in the matter.John Muir, the famous mountaineer and writer, has done more than any other man to expose this sheep evil, having carefully examined Its devastations throughout the State, and has eloquently pleaded for its suppression in many stirring appeals with tongue and pen.The following letter from Mr. Muir is to the point; the mention of Mr. Lukens refers to that gentleman's, letter formerly printed in the Express:MARTINEZ, Aug. 8, 1898. Mr. C. D. Willard:Dear Sir—I thank you for the editorial on forest reservations that lately appeared in the Evening Express. Scarce a beginning has been made as yet in staying destruction, and it is only by keeping our forests before the public, explaining their value, their far-reaching influence on the general welfare and the quickness of the destruction that threatens them, that a rational, permanent.management can be hoped for.I know Mr. Lukens as a careful and trustful observer, with extensive knowledge of our parks and reservations, and I shall be: glad to see more from his pen shoved bravely forward by your editorials.Yours very truly,JOHN MUIR.The Express will continue to show why mountain fires are: a direct blow at every fruit industry in their vicinity, and it urges every other journal to join In exposing the menace.Which shall prevail, the alien sheep herder or the tax-paying orchardist? There is no more important question before California farmers.Recent developments show that the government intends to patrol the mountains in this vicinity, but the government will need all the support it can get from the public in aid of its scant number of patrolmen. As Mr. Muir says, publicity is chiefly needful. Let the enormity of the camper's misdeeds and the sheep men's crimes be known.06490