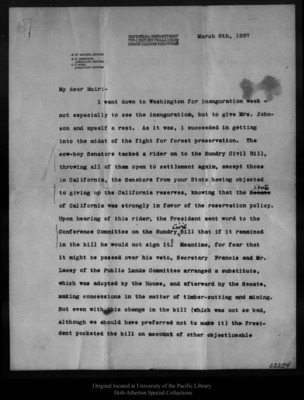 March 8th, 1897R. W. GILDER, EDITOR.R. U. JOHNSON, ASSOCIATE EDITOR. C. C. BUEL, ASSISTANT EDITOR. My dear Muir:- I went down to Washington for inauguration week - not especially to see the inauguration, but to give Mrs. Johnson and myself a rest. As it was, I succeeded in getting into the midst of the fight for forest preservation. The cow-boy Senators tacked a rider on to the Sundry Civil Bill, throwing all of them open to settlement again, except those in California, the Senators from your State having objected to giving up the California reserves, knowing that the State of California was strongly in favor of the reservation policy. Upon hearing of this rider, the President sent word to the Conference Committee on the Sundry [illegible] Bill that if it remained in the bill he would not sign it! Meantime, for fear that it might be passed over his veto, Secretary Francis and Mr. Lacey of the Public Lands Committee arranged a substitute, which was adopted by the House, and afterward by the Senate, making concessions in the matter of timber-cutting arid mining. But even with this change in the bill (which was not so bad, although we should have preferred not to make it) the President pocketed the bill on account of ether objectionable02254