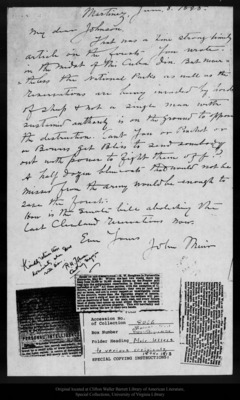 Martinez, June 8. 1898My dear Johnson,That was a fine strong timely article on the forests you wrote, in the midst of this Cuba [din?]. But nevertheless the National Parks as well as the reservations are being invaded by loads of sheep & not a single man with sustained authority is on the ground to oppose the destruction. Cant you or Pinchot or Bowers get Bliss to send somebody out with power to fight them off? A half dozen bluecoats - that would not be missed from the Army would be enough to save the forests.How is the Senate bill abolishing the Last Cleveland Reservations now.Ever YoursJohn Muir[in margin: Kindly return these documents when done with them.R.U. JohnsonCentury Magazine][newspaper clipping] [illegible] PERSONAL INTELLIGENCE.HERALD WEATHER FORECASTS:- The [illegible] depression has moved eastwardly, followed by a small area of lower temperature in the Lake region. A centre of disturbance [illegible] Northwest will slowly drift toward the [illegible] to continue[newspaper clipping] SHEEP ON THE RESERVATION.-E.W. Houghton in Porterville Enterprise, May 20: within the last two weeks there has been from 18,000 to 15,000 sheep driven up the Frasier mill road into the government reservation in direct and willful contempt of law. All these parties, with the exception of C. Brown, are aliens and non-residents; they own no land and pay no taxes, and are in every respect an unmitigable curse to the country, worse than the Egyptian plague of locusts. There is now a strip of land as wide as the settlers will permit as destitute of feed as the main road, and every future band of sheep that comes up must either starve or encroach more and more on private property. This will inevitably end n people taking the law in their own hands.[newspaper clipping] Mariposa.ANOTHER WAR ON HAND.-The condition of affairs in the California national parks, owing to trespassing herds, has grown serious. The guards of the regular army troops having been called away on account of the hostilities, the herds are taking advantage of their absence. Supt. MacKenzie, in a letter to Secretary Bliss, says that thousands of cattle and horses have passed through Yosemite Park. He is also credibly informed that sheep herders propose to [hold?] the ranges by force of arms against all comers, the [herders?] thus first reaching the range keeping out others. Those in charge of the flocks, he says, have been supplied with firearms by their employers, and he fears the Park may become the scene of a fierce struggle. Many of the herders and some of the owners are Portuguese and Basques and are capable of lawlessness under present conditions.Mendocino.[illegible]

Clifton Waller Barrett Library of American Literature, Special Collections, University of Virginia Library . Please contact this institution directly to obtain copies of the images or permission to publish or use them beyond educational purposes.