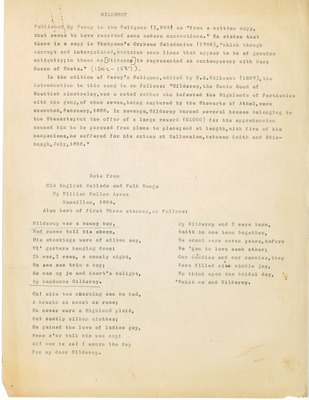 GILDEROY Published by Percy in the Reliques (I,884) as ΓÇ£from a written copy, that seems to have received some modern corrections.ΓÇ¥ He states that there is a copy in ThompsonΓÇÖs Orpheus Caledonius (1788), ΓÇ£which though corrupt and interpolated, contains some lines that appear to be of genuine antiquity; in these he [Gilderoy] is represented as contemporary with Mary Queen of Scots.ΓÇ¥ In the edition of PercyΓÇÖs Reliques, edited by R. A. Willmott (1857), the introduction to this song is as follows: ΓÇ£Gilderoy, the Robin Hood of Scottish minstrelsy, was a noted robber who infested the Highland of Perthshire with his gang, of whom seven, being captured by the Stewarts of Athel, were executed, February, 1688. In revenge, Gilderoy burned several houses belonging to the Stewarts; but the offer of a large reward (L1000) for his apprehension caused him to be pursued from place to place; and at length, with five of his companions, he suffered for his crimes at Gallowslee, between Leith and Edinburgh, July, 1688.ΓÇ¥ Note from Old English Ballads and Folk Songs by William Dallam Armes Macmillan, 1904. Also text of first three stanzas, as follows: Gilderoy was a bonnie boy Had roses tull his shoon His stockings were of silken soy WiΓÇÖ garters hanging doun. It was, I ween, a comely sight To see so trim a boy. He was my jo and heartΓÇÖs delight My handsome Gilderoy. O sike twa charming een he had A breath as sweet as rose; He never ware a Highland plaid But costly silken clothes. He gained the luve of ladies gay. Nane eΓÇÖer tull him was coy. Ah! wae is me! I mourn the day For my dear Gilderoy. My Gilderoy and I were born Baith in one toun together; We scant were seven years, before We ΓÇÿgan to luve each other; Our daddies and our mammies, they Were filled wiΓÇÖ mickle joy To think upon the bridal day, ΓÇÿTwixt me and Gilderoy.