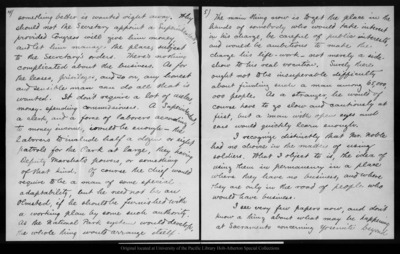 4/something better is wanted right away. Why should not the Secretary appoint a Superintendent, provided Congress will give him money, and let him manage the place, subject to the Secretary’s orders. There’s nothing complicated about the business. As for the leases, privileges, and so on, any honest and sensible man can do all that is wanted. It don’t require a lot of useless money-spending commissioners. A Superintendent, a clerk, and a force of laborers according to money income, would be enough – the laborers to include half a dozen or eight patrols for the Park at large, they have Deputy Marshal’s powers, or something of that kind. Of course the chief would require to be a man of some special adaptability, but he need not be an ol[illegible]shed, if he should be furnished with a working plan by some such authority. As the National Park system would develop, the whole thing would arrange itself.5)The main thing now is to get the place in the hands of somebody who would take interest in his charge, be careful of public interests, and would be ambitious to make the charge his life-work – not merely a side-show to his real vocation. Surely there ought not to be insuperable difficulty about finding such a man among 65,000,000 people. As a stranger, he would of course have to go slow and cautiously at first, but a man with open eyes and ears would quickly learn enough. I recognize distinctly that Mr. Noble had no choice in the matter of using soldiers. What I object to is, the idea of using them in permanency in a place where they have no business, and where they are only in the road of people who would have business. I see very few papers now, and don’t know a thing about what may be happening at Sacramento concerning Yosemite beyond