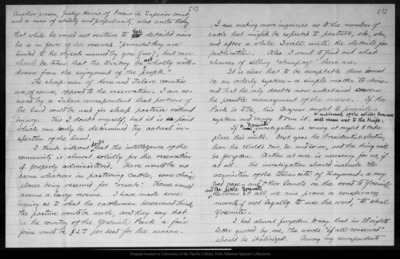 [2]Another person, Judge Harris, of Fresno Co. Superior court, and a man of ability and popularity, also writes today that while he would not venture to give detailed views he is in favor of the reserves “provided they are limited to the objects named by you [me]; but care should be taken that the territory be not wholly with-drawn from the enjoyment of the people.” The sheep-men of Kern and Tulare counties are, of course, opposed to the reservation. I am assured by a Tulare correspondent that portions of the land could be used for sheep pasture without injury. This I doubt myself; but it is a point which can only be determined by actual inspection of the land. I think without doubt that the intelligence of the community is almost solidly for the reservation if properly administered. There would be no harm whatever in pasturing cattle, some choice place being reserved for “resorts” Thence would accrue a large revenue. I have made some inquiry as to what the cattle-men herearound think the pasture would be worth, and they say that in the country of the Yosemite Park a fair price would be $200 per head for the season.[3]I am making more inquiries as to the number of cattle that might be expected to pasture, etc. etc., and after a while I will write the details for publication. Also I want to find out what chances of selling “stumpage” there are. It is clear that to be acceptable there must be an orderly system - a simple matter to devise – and that the only doubts now entertained concern the possible management of the reserve. If the Park is to be, this Congress ought to provide a system and money to run it. A continuance of the soldier business will mean war to the knife. If a Yosemite investigation is coming it ought to take place this winter. Next year the Presidential election, then the World’s Fair, &c. and so on, and the thing will be forgotten. Action at once is necessary for us, if at all. The investigation should include the acquisition of the town-site of Raymond – a very bad case – and other lands on the road to Yosemite, and the Little Yosemite Between it all, we can prove a conspiracy, morally if not legally to use the word, to steal Yosemite. I had almost forgotten to say that in W[illegible] letter quoted by me, the words “if all conserved” should be italicized. Among my correspondents