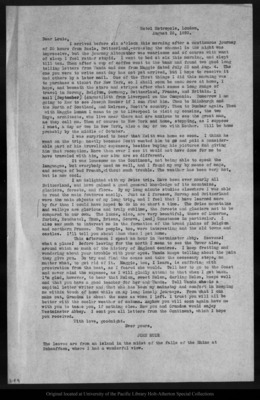 Hotel Metropole, London,August 28, 1893.Dear Louie,I arrived before six o'clock this morning after a continuous journey of 20 hours from Basle, Switzerland,-crossing the channel in the night was impressive, but the .journey altogether was wearisome and of course with want of sleep I feel rather stupid. I went to bed at six this morning, and slept till ten. Then after a cup of coffee went to the bank and found two good long telling letters from Wanda and one from Maggie dated July 25 and Aug. 4. The one you were to write next day has not yet arrived, but I hope to receive it and others by a later mail. One of the first things I did this morning was to purchase a ticket for New York, so I shall soon be once more at home, I hope, and beneath the stars and stripes after what seems a long range of travel in Norway, Belgium, Germany, Switzerland, France, and Britain. I sail [September] (August) 16 th from Liverpool on the Campania. Tomorrow I am going to Kew to see Joseph Hooker if I can find him. Then to Edinburgh and the North of Scotland, and Melrose, Scott's country. Then to Dunbar again. Then with Maggie Lunam I mean to go to Liverpool to visit my cousins, the two Hays, architects, who live near there and are anxious to see the great man, as they call me. Then of course to New York and home, stopping, as I suppose I must, a day or two in New York, also a day or two with Mother. Will be home probably by the middle of October.I was surprised to hear that Keith was home so soon. I think he went on the trip mostly because Scott wanted him to go and paid a considerable part of his traveling expenses, besides buying his pictures and giving him that reception. More than ever I see it would not have done for me to have traveled with him, our a ims, are so different.It was lonesome on the Continent, not being able to speak the languages, but everybody used me well, and I found my way by means of maps, and scraps of bad French,without much trouble. The weather has been very hot, but is now cool.I am delighted with my Swiss trip. Have been over nearly all Switzerland, and have gained a good general knowledge of its mountains, glaciers, forests, and flora. By my long minute studies elsewhere I was able to read the main features easily. Just as I foresaw, Norway and Switzerland were the main objects of my long trip, and I feel that I have learned more by far than I could have hoped to do in so short a time. The Swiss mountains and valleys are glorious and truly sublime, the forests and glaciers not to be compared to our own. The lakes, also, are very beautiful, those of Lucerne, Zurick, Neuchatel, Thun, Briens, Geneva, [and] Constance in particular. I also saw much to interest me in the formation of the broad plains of Belgium and northern France. The people, too, were interesting and the old towns and castles. I'll tell you about them when I get home.This afternoon I spent an hour in Westminster Abby. Heavens! what a place! Before leaving for the north I mean to see the Tower also, around which so much of the history of England centres. I keep fretting and wondering about your trouble with your eyes. Wanda keeps telling about the pain they give you. Do try and find the cause and take the necessary steps, no matter what, to get rid of it. Maggie, too, I learn, is suffering with prostration from the heat, as I feared she would. Tell her to go to the Coast and never mind the expense, as I will gladly attend to that when I get back. I'm glad, however, to hear that Helen, sweet Helen, darling Helen, keeps well and that you have a good teacher for her and Wanda. Tell Wanda she is a capital letter writer and that she has boon my mainstay and comfort in keeping me within touch of home while on my long lonely journeys. From what I can make out. Grandma is about the same as when I left. I trust you will all be better with the cooler weather of autumn. Anyhow you will soon again have me with you to tease you, if nothing else. How you and Grandma would enjoy Westminster Abbey. I sent you all letters from the Continent, which I hope you received.With love, goodnight.Ever yours,JOHN MUIRThe leaves are from an island in the midst of the falls of the Rhine at Schauffasn, where I had a wonderful view.