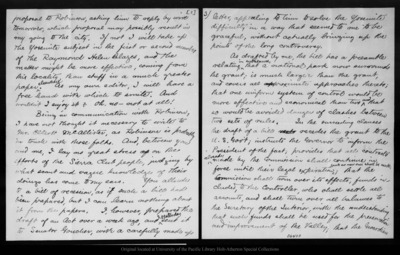 [2]proposal to Robinson, asking him to reply by wire tomorrow, which proposal may possibly result in my going to the city. If not I will take up the Yosemite subject in the first or second number of the Raymond Helen [Blazes?], and the matter might be more effective, coming from this locality than stuff in a much greater paper elsewhere. As my own editor, I will have a free hand with which to smite. And wouldn’t I enjoy it? Oh, no – not at all! Being in communication with Robinson, I have not thought it necessary to write to Mr. Elliott McAllister, as Robinson is probably in touch with those folks. And, between you and me, I lay no great stress on the efforts of the Sierra Club people, judging by what [scant?] and vague knowledge of their doings has come to my ears. You allude to a bill of recession, as if such a bill had been prepared but I can learn nothing about it from the papers. I, however, prepared the draft of an Act over a week ago, and yesterday sent it to Senator Goucher, with a carefully made up3/letter, appealing to him to solve the Yosemite difficulty in a way that seemed to me to be graceful, without actually bringing up the points of the long controversy. As drafted by me, the bill has a preamble relating in substance that a national park now surrounds the grant; is much larger than the grant, and covers all proximate approaches thereto; that one uniform system of control would be more effective and economical than two and that so would be avoided danger of clashes between two sets of rules. In the succeeding clauses the draft of a bill recedes the grant to the U.S. Govt; instructs the governor to inform the President of the fact; provides that all contracts already made by the commission shall continue in force until their legal expiration; but no new ones shall be made, that the Commission shall turn over its effects, funds included, to the Controller, who shall settle all accounts, and shall turn over all balances to the Secretary of the Interior, with the understanding that such funds shall be used for the preservation and improvement of the Valley; that the [Guardian?]06430