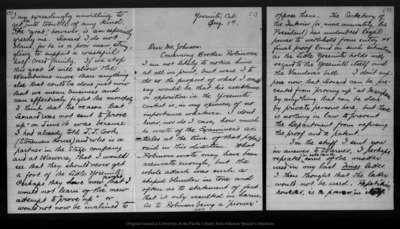 [4]I am exceedingly unwilling to get him into trouble of any kind. The "grab," however, is an especially greedy one. Leonard I do not blame, for he is a poor man, struggling to support a wasteful half-breed family. If we stop this grab it will show the Washburns more than anything else that would be done just now that we mean business and can effectively fight the monopoly. I think that the reason that Leonard was not sent to "prove up" on June 16 was because I had already told J. J. Cook, (Stoneware House,) and who is a partner in the Stage company and at Wawona, that I would see that they should never get a foot of the Little Yosemite. Perhaps they have now thought that I would not learn of the new attempt to "prove up" or would not now be inclined to [1]Yosemite, Cal.Aug. 3d.Dear Mr. Johnson:Concerning Brother Robinson, I am not likely to notice him at all in print, but were I to do so the purport of what I would say would be that his assistance or opposition in the Yosemite contest is, in my opinion, of no importance whatever. I don't know, nor do I care, how much he wrote of the Examiner's articles at the time of that paper's raid in this direction. What Robinson wrote may have been accurate enough, but the whole attack was such a stupid blunder in tone and often as to statement of fact that it only resulted in harm. As to Robinson being a "pioneer"06403[5]oppose them. The Secretary of the Interior (or, more accurately, the President) has undoubted legal power to withhold from entry or final proof land in such situation as the Little Yosemite holds with regard to the Yosemite itself and the Vandever bill. I don't suppose now that Leonard can be prevented from "proving up" at Mariposa by anything that can be done by private persons here; but there is nothing in law to prevent the Department from refusing the proof and a patent. In the stuff I sent you in answer to Warner, I perhaps repeated in substance some of the matter used in my last Times letter. I then thought that the latter would not be used. Repetition, however, is a power in itself.