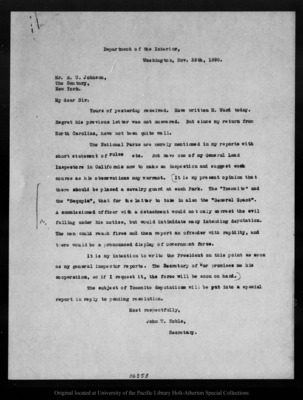 Department of the Interior,Washington, Nov. 26th, 1890.Mr. H. U. Johnson, The Century,New York.My dear Sir:Yours of yesterday received. Have written M. Ward today. Regret his previous letter was not answered. But since my return from North Carolina, have not been quite well.The National Parks are merely mentioned in my reports with short statement of rules etc. But have one of my General Land Inspectors in California now to make an inspection and suggest such course as his observations may warrant.It is my present opinion that there should be placed a cavalry guard at each Park. The "Yosemite" and the "Sequpia", that for the latter to tale in also the "General Grant". A commissioned officer with a detachment would not only correct the evil falling under his notice, but would intimidate many intending deputation. The men could reach fires and then report an offender with rapidity, and there would be a pronounced display of Government force.It is my intention to write the President on this point as soon as my general inspector reports. The Secretary of War promises me his cooperation, so if I request it, the force will be soon on handThe subject of Yosemite deputations will be put into a special report in reply to pending resolution.Most respectfully,John W. Noble,Secretary.